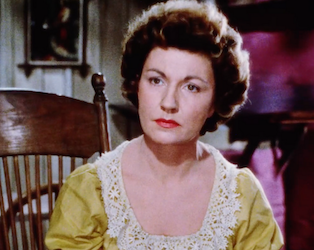 SHE DIDN’T SAY NO! FROM THE ARCHIVE TO THE IFI PLAYER

She Didn’t Say No! based on Una Troy’s charming novel We Are Seven tells the story of Bridget Monaghan, an unmarried woman in the town of Doon, Co Waterford, Ireland during the 1950s. Although Bridget independently supports her six children through her dressmaking work, the children’s fathers, who are all local married men, see her as a social embarrassment, plotting to take her children from her and drive her from the town.

The project was scheduled for production in Ireland until permission was refused and production moved to Cornwall, England. On its release, the film was banned in Ireland because of its then controversial storyline. The whimsical and comedic treatment given to this serious subject matter and the moral reaction of the Irish authorities to the film’s production make it an excellent prism through which to examine changing attitudes to family structures and the way unmarried mothers and their children have been treated over time.

A newly mastered version of the film is presented on the IFI Player as part of the ‘A Season of Classic Films’, an initiative of ACE – Association des Cinémathèques Européennes, with funding from the European Commission’s Creative MEDIA programme.

The digitisation and remastering was undertaken in collaboration with R3store studios in London, a company the IFI Irish Film Archive has worked with regularly due to their experience in handling archival materials. The long established working relationship between the two organisations minimised the logistical issues that could have arisen from attempting such a project in the midst of a pandemic. The IFI was also fortunate to preserve a lovely 35mm film print of She Didn’t Say No!, which had been struck from the negative held in Technicolor, in 2003. The excellent quality of this source material meant that following digitisation, few interventions were necessary. A small amount of surface dirt and a few scratches to the emulsion of the film (acquired during cinema screenings) were the main concern and these were easily digitally removed by the team in R3store resulting in this beautiful super-saturated digital print which we are delighted to present as part the Season of Classic films.

Watch She Didn’t Say No! here.

Twenty-two institutions from all over Europe, including the Irish Film Institute, are taking part in the initiative of the Association des Cinémathèques Européennes ‘A Season of Classic Films’.

The programme offers free access to European archival films to acquaint the public, younger viewers in particular, with cinema history and the preservation of film heritage.