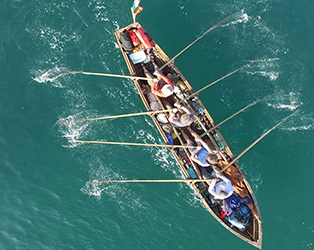 Commenting on the launch of this globally accessible collection of creative Irish film, Ross Keane, IFI Director, said, ‘In the past year, the IFI has had to transform the way in which we connect with our audiences, moving most of our activities online through IFI@Home and IFI@Schools, and most recently through the launch of IFI International which has allowed us to continue to service and facilitate international film festivals all around the globe with Irish film programmes. We are pleased that with the launch of this new collection today, the IFI International platform will also have a permanent collection that sits outside the festival circuit, offering audiences all around the world an opportunity to engage with Irish film culture at any time that was heretofore unavailable. We were cognisant of the lack of availability of many Irish film titles to international audiences due to exhibition rights restrictions, and we are therefore delighted to now be able to stream Irish films into homes worldwide.‘

The IFI Collection is a compendium of new and recent Irish films representing the best of Irish independent filmmaking talent. Together the films create a vibrant, multi-faceted picture of Irish life with subjects ranging from the historical to the contemporary. The Collection launches with a formally-varied series of feature-length documentaries – memoirs, experimental essays, documentary profiles and hybrid blends of fact and fiction – and will be supplemented regularly with new drama and documentary films.

Speaking about the worldwide cultural reach of the IFI Collection, Christine Sisk of Culture Ireland commented, ‘Culture Ireland is delighted that this new collection, containing so many great films is now available for international viewing. The collection reflects a wide range of Irish creative talent and its release for global audiences is timely given the current challenges for physical presentation.‘

Films launching as part of the collection include Dónal Ó Céilleachair’s universally resonant The Camino Voyage, the epic story of a writer, two musicians and a stonemason on an unlikely journey, and the Lahinch-set Between Land and Sea, directed by acclaimed documentarian Ross Whitaker. Other sports documentaries from Whitaker included in the collection are boxing film Saviours and the award-winning, life-affirming Unbreakable: The Mark Pollock Story.

Reflecting on processes of illustration and philosophy, another film by Ó Céilleachair, Dreamtime Revisited, and Pat Collins’s Tim Robinson: Connemara bring the focus back to land with stories of mapping landscapes and the self. Examining mortality and community are Gillian Marsh’s Sligo-set The Funeral Director; and Paul Duane’s film on the KLF, Welcome to the Dark Ages. Depicting a place between the living and the dead, the rational and the irrational, is Alan Gilsenan’s poetic portrait A Vision: The Life and Death of W.B. Yeats.

Intricacies of borders themselves are examined in Tadhg O’Sullivan’s The Great Wall, filmed across 11 countries, looking at Europe’s walls and fences and the power structures behind them. Investigating borders across Ireland itself, Margo Harkins’s The Far Side of Revenge follows a group of Northern Irish women as they prepare a theatre piece presenting their own personal stories relating to The Troubles. The cultural and artistic endeavours of Irish women are further explored in Clare Dix’ s We Are Moving: Memories of Miss Moriarty, which offers an intimate portrait of early dance pioneer Joan Denise Moriarty, and throughout the IFI & Women in Film and Television Ireland programme of short films, Brief Encounters.

Also included in this diverse programme of cultural Irish films is An Irish Music Trilogy, three music documentaries exploring tradition and creativity with the musicians of the West County Cork Gaeltacht, Múscraí. These films are presented alongside contemporary music documentaries: Niall McCann’s playful The Science of Ghosts and Claire Dix’s Broken Song.

Investigating art and artists more broadly is Conor Horgan’s The Beholder in which he observes Irish portrait artists, such as James Hanley and Mick O’Dea, at work, and Mark McLoughlin’s Blood Rising in which artist Brian Maguire travels to Ciudad Juarez to dive into Mexican art, culture and stories. Also streaming are artist profiles including Sé Merry Doyle’s Jimmy Murakami: Non-Alien, and David Cairns and Paul Duane’s Natan, telling the story of French silent film director Bernard Natan. The Devil’s Pool is Cecily Brennan’s investigation of the intersection of creativity and madness in art and features interviews with creative figures, including playwright Frank McGuinness and the poet Paul Muldoon.

Films considering the intersection of architecture and creativity include Photo City (dir. John Murphy and Traolach Ó Murchú), a portrait of Rochester, NY and the city’s relationship to photography, and Floating Structures (dir. Feargal Ward and Adrian Duncan), which explores an array of structures in central and southern Europe, and the work of Irish engineer Peter Rice. Build Something Modern uses visual language to tell the story of Irish modernist architects whose works were commissioned by Catholic missionaries in Africa. Closer to home, Sé Merry Doyle’s Talking To My Father presents architect Simon Walker, exploring the legacy of his father Robin Walker’s work.

The IFI Collection is available to rent on https://www.ifiinternational.ie/page/ifi-collection/ and can be viewed online or on the IFI International App for iOS or Android.

IFI is principally funded by the Arts Council. IFI International is supported by Culture Ireland.