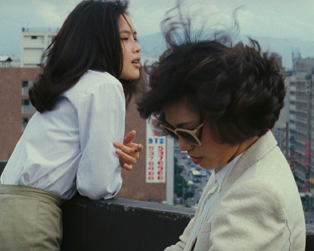 March 11th 2021: The fifth edition of the East Asia Film Festival Ireland (EAFFI) comes to IFI@Home for its second online edition this month from March 25-28. As usual, this year’s festival will feature a fantastic selection of new and classic East Asian cinema, including the latest film from former festival guest Tsai Ming-Liang Days, the acclaimed The Cloud in Her Room, documentaries My Vietnam and The Witches of the Orient, and Edward Yang’s classic Taipei Story. The festival programme also includes a wealth of bonus material including specially recorded interviews and introductions with a number of the featured directors.

Commenting on this year’s programme, the festival’s Artistic and Programming Director Marie-Pierre Richard said, ‘The East Asia Film Festival Ireland 2021 continues to innovate, with another challenging and inspiring programme. Both emerging and established filmmakers push the limits of traditional narrative by exploring the cinematic language. The programme explores pressing issues in these extraordinary times – belonging and identity in times of disruptions, personal choices and challenges – reminding us how cinema continues to reflect and help us to understand our lives through the lives and inspiration of others.’

The festival opens with Yukiko Sode’s Aristocrats. Based on the novel Ano Ko wa Kizoku: Tokyo Noble Girl by Mariko Yamauchi, this sophisticated drama centres on two women from very different backgrounds who meet after falling for the same man. Examining the class and gender divides in modern Japanese society, the film features two stand-out performances from Mugi Kadowaki and Kiko Mizuhara. The screening will include a Q&A with the director.

Tsai Ming-Liang’s slow-burning Days stars Lee Kang-Sheng and Anong Houngheuangsy as two lonely men, one who lives alone in a large house, the other a Laotian immigrant, who meet and form a intimate relationship in this beautifully shot film, the first feature from Tsai since 2013’s Stray Dogs. The film will include a Q&A with the director.

Yoon Dan-bi’s Moving On also focuses on a family facing bereavement, as Byunggi (played by Heung-ju Yang), struggling to make ends meet, moves with his two children into his elderly father’s house. Things become complicated when his sister Mijung, whose marriage is in trouble, also arrives at the house. Anocha Suwichakornpong’s Come Here focuses on four young friends who embark on a trip to the town of Kanchanaburi in western Thailand to visit the local World War II memorial. The screening of Come Here will be introduced by the director.

Kiyoshi Kurosawa’s To the Ends of the Earth centres on Japanese travel reporter Yoko (Atsuko Maeda) who travels to Uzbekistan on assignment. Examining the experience of a single woman travelling abroad for work, the film explores the central character’s alienation from her surroundings and the people around her in a number of beautifully lit and framed scenes. Produced by Wong Kar-Wai, Pema Tseden’s mysterious Jinpa centres on a man who picks up a hitch hiker, who is on a missing to kill someone who wronged him earlier in his life.

Winner of the Best Film prize at the 2020 Rotterdam Film Festival, Zheng Lu Xinyuan’s The Cloud in Her Room is a monochrome delight that centres on a melancholic 22-year-old Muzi (Jin Jing) who wanders around the city of Hangzhou spending time with friends and her boyfriend. With an experimental edge and a striking soundtrack by Tseng Yun-Fang, the film calls to mind the early French New Wave cinema of Godard and Truffaut. The screening will include a Q&A with the director Zheng Lu Zinyuan and Irish director Vanessa Gildea.

Julien Faraut’s documentary The Witches of the Orient focuses on the all-conquering Japanese women’s volleyball team known as the ‘Witches of the Orient’ as they prepare to compete on home soil at the 1964 Olympics. The women undergo arduous training as they prepare, leading them to a record-setting run of 258 victories. Mixing anime and archival footage, the film is stunningly crafted by Faraut, the director of John McEnroe: In the Realm of Perfection (IFI French Film Festival 2018), who will also feature in a Q&A.

My Vietnam is a deeply moving documentary about a husband and wife from Vietnam who, struggling to survive on their meagre living in Germany, yearn to return to their homeland. The screening will include a Q&A with directors Hien Mai and Tim Ellrich.

Five-hour epic Happy Hour, directed by this year’s Berlin Silver Bear winner Ryusuke Hamaguchi, is another female focused drama, this time looking at the lives of a close quartet of female friends all in their thirties, as they travel from their hometown of Kobe to a spa resort for a short holiday. With a mix of professional and non-professional performers, the film creates an unforgettable and utterly absorbing cinematic experience that more than justifies its 317-minute running time.

The focus of Edward Yang’s 1985 classic Taipei Story is a couple, played by Tsai Chin and former festival guest Hou Hsiao-Hsien, beginning to drift apart. Unravelling in a city caught between the past and the present, and between Japanese and American influences, the pair’s plans fall apart as the reality of their situtation beings to weigh heavily on them. The screening will be accompanied by a conversation with renowned sound editor/engineer/mixer Tu Duu-chih and Professor Chris Berry.

From legendary wuxi director King Hu comes the 1979 action classic Raining in the Mountain, set in the 8th century Bulguksa Buddhist temple where a corrupt general and an ambitious squire plan to steal a sacred handwritten scroll. When the monastery’s abbot dies, a series of betrayals and murders ensue in the struggle for the invaluable manuscript.