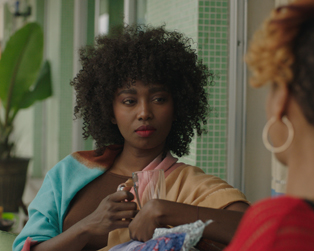 January 11th 2021: As part of the fourth Night of Ideas, the Irish Film Institute (IFI), in association with the French Embassy in Ireland, is delighted to present a special online screening of Jared P. Scott’s documentary The Great Green Wall from 18.30 on Thursday, January 28th. The film is now available to pre-order from www.ifihome.ie.

The Night of Ideas is a worldwide initiative spearheaded by Institut Français celebrating the stream of ideas between countries, cultures and generations. This year’s screening forms part of The Green Night of Ideas 2021, a series of digital screenings followed by debates on climate change taking place in cultural institutions across Ireland in January and February 2021.

Director Jared P. Scott and Malian musician/activist Inna Modja, in collaboration with Oscar-nominated Executive Producer Fernando Meirelles (City of God, The Constant Gardener),  bring us on an epic journey along Africa’s Great Green Wall, an ambitious project to grow an 8,000km ’wall’ of trees stretching across the entire width of the continent to restore land and provide a future for millions of people.

Commenting on this year’s event, IFI Director Ross Keane, said, ‘IFI is delighted to partner with the French Embassy in Ireland for this fourth Night of Ideas event, and the first exclusively online. We are especially excited that the nationwide reach of IFI@Home will bring the hugely important environmental message of this documentary to audiences across Ireland.’

Speaking ahead of the Night of Ideas, French Ambassador Vincent Guérend added, ‘The French Embassy is delighted to organise La Nuit des Idées vertes, the Green Night of Ideas, in Ireland. This year’s programme is entirely dedicated to climate change with a series of screenings and debates presented in partnership with key Irish Cultural organisations across January and February. This will be our first online Green Night of Ideas to raise awareness and discuss positive actions and projects. For the first time we are also reaching out to schools with a special free screening available to all and to involve young people. We are particularly delighted to draw the attention of the Irish public to the Great Green Wall project for the Sahara and the Sahel in our partnership with the IFI, a subject which is on the agenda of the One Planet Summit happening in Marseilles today and which will bring together global leaders and international organisations to act in the interest of biodiversity’.

This screening will be followed by a live online panel discussion that will explore the challenging ecological balances of our time and humanity’s relationship to nature in the global context of biodiversity loss as a result of climate change.

The film is now available to pre-order from https://www.ifihome.ie/film/ifi-and-night-of-ideas-the-great-green-wall/. The film will be available to rent until 18.30 on Sunday, January 31st.

For more information, including interview availability, please contact Stephen Boylan at sboylan@irishfilm.ie. Information is also available from Elisabetta Sabbatini at the French Embassy in Ireland on 085 1186402 or e.sabbatini@ambafrance-ie.org .See also https://ie.ambafrance.org/The-Green-Night-of-Ideas-in-Ireland-2021.