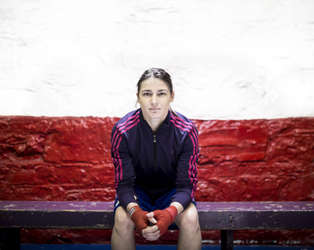 December 8th 2020: The Irish Film Institute is pleased to announce the launch of a newly-created collection on its video-on-demand platform IFI@Home. GOOD SPORTS is a new selection of films from Irish and UK directors focusing on the Irish sporting community, looking at notable figures who have made an impact on the domestic or global stage.

The collection will feature seven films including Ross Whitaker’s Katie, Daniel Gordon’s George Best: All By Himself, Seán Ó Cualáin’s Crash and Burn, and Peter Kelly’s Journey to the Edge, which received its world premiere as part of the 2019 IFI Documentary Festival. The collection will include three further films from Whitaker: Between Land and Sea, Unbreakable: The Mark Pollock Story, and Saviours, co-directed by Liam Nolan. Each of the films is now available to rent from IFI@Home on www.ifihome.ie for just €3.99.

Speaking about the launch, IFI Head of Irish Film Programming Sunniva O’Flynn commented, ‘This is a really strong collection of work infused with all the drama that you expect from a good sporting documentary. The films aren’t simply about the relentless pursuit of trophies but offer fully-textured portraits of athletes as they attempt to triumph, often against the odds. We have been delighted by the wholehearted support of the filmmakers who have been keen to present their work on IFI@Home where the screen may be smaller but the potential audience is considerably bigger.’

Ross Whitaker’s Katie follows Katie Taylor, one of Ireland’s most successful athletes, as she aims to recover from a disastrous campaign at the 2016 Rio Olympics and go professional. With a small, unobtrusive crew, Whitaker unravels the deeply personal reasons that have driven her career choices, and reveals a woman of undeniable charisma and warmth, fuelled by a champion’s grit and determination.

In George Best: All By Myself, director Daniel Gordon assembles a dynamic selection of interviews alongside an astonishing wealth of archive footage to capture the excitement of the late George Best’s rise to fame. A transcendent footballer, Best’s life was filled with glamorous women, fancy cars and forays into the world of fashion, all undone by a pattern of self-destructive behaviour.

Seán Ó Cualáin’s Crash and Burn focuses on Tommy Byrne who, for one fleeting moment, was Formula 1’s greatest driver. Coming from humble Dundalk roots, Byrne’s wild behaviour ultimately led to his exclusion from one of the world’s most elite sporting clubs. Ó Cualáin meets him in Florida, examining a career that was doomed before it even began.

Peter Kelly’s Journey to the Edge, which received its world premiere at the 2019 IFI Documentary Festival, centres on the epic journey of entrepreneur Enda O’Coineen and his attempt to circumnavigate the world as part of the renowned Vendée Globe boat race. Battling extremes at every point of the course, the film is a no-holes-barred look at the dedication and the physical and mental fortitude required to compete in one of sport’s greatest challenges.

Ross Whitaker’s Between Land and Sea is a stunning observational film, embedding itself in a community of surfers in Lahinch, Co. Clare, and following their lives on-and off-season over the course of a year. Having dedicated their lives to the ocean, the surfers lead modest lives, eschewing the luxuries of city life and engaging in sustainable agricultural projects to feed themselves and their young families. Unbreakable: The Mark Pollock Story follows the inspirational story of Mark Pollock who became the first blind person to complete the Amundsen Omega 3 South Pole Race in 2009. Tragedy strikes a year later however when Pollack becomes paralysed following a fall.

Finally, Saviours, co-directed by Whitaker and Liam Nolan, centres on St Saviour’s Olympic Boxing Academy in Dublin’s north inner city. The film captures the vivid rough and tumble, riveting and often humorous real-life story of three young fighters over the course of two years. The film paints a vivid portrait of a small inner-city boxing club and the lives of those connected to it.