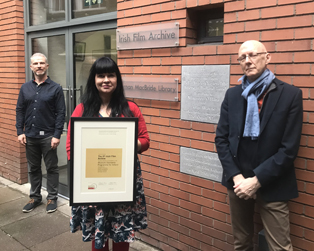 The IFI Irish Film Archive is the home to over 30,000 cans of films and 10,000 broadcast tapes dating back to 1897. The material safeguarded in the Archive is historically, socially and culturally invaluable and provides a unique visual record of the development of modern Ireland. The collection reflects the many facets of indigenous moving image production and includes newsreels, feature films, home movies, travelogues, advertisements and documentaries, amongst others.

Speaking about the award, IFI Director Ross Keane said, ‘IFI is delighted that the IFI Irish Film Archive has received a full MSPI accreditation from the Heritage Council. It is a welcome recognition of the world-class processes that the Archive has put in place and the standards it rigorously maintains in relation to its vital work in preserving Ireland’s film heritage.’

Kasandra O’Connell, Head of the IFI Irish Film Archive, added, ‘In such a challenging year it is validating to have the dedicated collections management work of the Archive team recognised through full MSPI accreditation. Despite the pandemic we have continued to ensure that Ireland’s national moving image heritage is preserved to the highest standard.’

Established in 2006 to benchmark and promote professional standards in the care of collections, the MSPI has attracted involvement across the cultural spectrum. While recognising the achievement of standards through accreditation, the MSPI also supports the museum community as a whole, with its participants engaging in a range of processes which help to secure Ireland’s collections for future generations. The programme benchmarks organisations against 34 standards including caring for collections, museum management, education, exhibition and visitor services.

As part of the MSPI accreditation process, the IFI Irish Film Archive staff were assessed in seven main areas, demonstrating its adherence to best practice by submitting a range of policies, procedures and other documentation. This comprehensive process culminated with the onsite visit of two assessors to inspect the IFI Irish Film Archive’s operations first-hand and discuss the application with staff. Accreditation was awarded in the summer with accreditation certificate received in December.

The MSPI Assessors added, “The IFI Irish Film Archive continues to demonstrate a consistent commitment to the development of staff, and staff commitment to expanding their own skills for the benefit of the collection, the organisation and Irish film heritage. The IFI Irish Film Archive Strategic Management Plan, in particular, captures the clarity of current thinking about the Archive and its role in IFI. We congratulate all involved in developing and approving it, for its setting of clear goals, and drawing together all the different roles of the Archive.”

The accreditation is latest award for the IFI Irish Film Archive’s pioneering work – in 2018, it won a Digital Preservation Coalition Award, beating off competition from the White House Historical Association Digital Library and the UK’s House of Parliament Archives, while in 2019 it won a prestigious JTS Award, a prize given by the CCAAA (Co-ordinating Council of Audiovisual Archives Associations) in recognition of its world-leading digital preservation work.