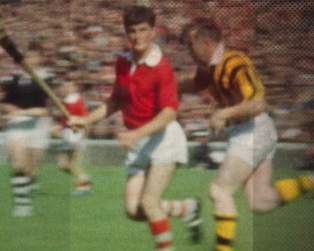 September 9th 2020: The Irish Film Institute is delighted to announce the launch of the GAA Collection on the IFI Player. Featuring commentary from the legendary Micheál O’Hehir, the collection covers All-Ireland football finals from 1947 to 1959 and hurling finals from 1948 to 1968. The material is available free-to-view worldwide for a limited time online on the IFI Player at www.ifiplayer.ie/gaa and the IFI Player suite of apps.

Football highlights of the collection include the 1947 All-Ireland football final, held in New York’s Polo Grounds, which saw Cavan beat out Kerry by 2-11 to 2-7; Mayo’s now famous 1951 victory, their last, against Meath; the last appearances of Cavan (1952) and Louth (1957) in the final; plus the 1956 game between Cork and Galway, delayed to October due to a polio outbreak that year in the Rebel County.

Hurling highlights include Waterford’s last victory in 1959; Tipperary and Cork’s six-year dominance of the championships between 1949 and 1954; and the appearance of actor John Gregson with the Kilkenny team during the pre-match parade as part of the production of the film Rooney.

Commenting on the release of The GAA Collection, IFI Director Ross Keane said, ‘The films in this collection depict a remarkable ambition to capture two of the fastest field sports on 16mm film, and allow us to experience some of the earliest footage of Gaelic football and hurling. The IFI is proud to provide access to the rich heritage of our national games to audiences across Ireland and the world via the IFI Player.’

From the 1940s to 1970s, the National Film Institute, now the Irish Film Institute, produced and distributed a number of educational and entertainment films, the best known of which was a series of GAA football and hurling All-Ireland final highlights from 1948 to 1979. The matches were filmed by some of Ireland’s most legendary cameramen including Bob Monks, Brendan Stafford, Vincent Corcoran and George Fleischman.

Alongside the terrific sports footage, the films also give a fascinating insight into the social history of the time. The high-profile appearances of Catholic archbishops is notable, as is their role in starting the games. The films also include pre-match footage of the areas surrounding Croke Park as fans make their way to the game, as well as footage of 1940s O’Connell Street. The footage from 1959 onwards is also hugely important as it was the first time the matches were filmed in colour; RTÉ did not start broadcasting in colour until 1969.

The GAA Collection joins a wealth of other materials preserved in the IFI Irish Film Archive, which holds over 30,000 cans of film dating from 1897. Other collections currently available free-to-view worldwide include The Irish Adverts Project, featuring restored ads from the 1960s, 1970s and 1980s; The Irish Independence Film Collection, a treasure trove of repatriated newsreel material from British Pathé, exploring a tumultuous time in Ireland’s history; and the Loopline Collection Vol. 1, a collection of short films and documentaries from Sé Merry Doyle’s acclaimed production company Loopline Film.