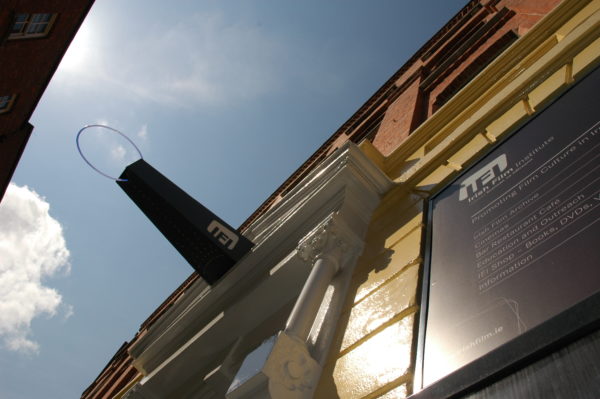 THE IRISH FILM INSTITUTE UNVEILS ITS AMBITIOUS PLANS FOR 2019

February 13th 2019: The Irish Film Institute (IFI) today announces its ambitious plans for 2019 across its core activities of exhibition, preservation and education. As always, the Home of Film in Ireland will bring exciting new strands, events and seasons to audiences both in Dublin and across the country, in addition to its ever-popular festivals, comprehensive educational initiatives, historically significant archival projects, and the completion of its highly-anticipated refurbishment plan.

2019 looks set to be one of the most significant years for the IFI across its core areas of film exhibition, preservation and education. In order to successfully deliver many of these programmes, the IFI will undergo a major capital refurbishment project in summer 2019 which will see, amongst other improvements, two completely refurbished cinema spaces, offering IFI audiences the opportunity to see films with the best of facilities. The major refurbishment will maintain all the charm of the existing 18th century Quaker building in which the IFI makes its home, but will see changes that will bring increased comfort and enjoyment to film lovers who visit.

The IFI’s comprehensive exhibition programme will include a complete retrospective of the work of one of the most pivotal figures in French cinema, Robert Bresson, director of such classics as Au Hasard Balthazar and The Trial of Joan of Arc; a season entitled Memory on Film will highlight how this most abstract of concepts has been represented on screen; a short focus will showcase the feature films of Derek Jarman, one of the most influential figures in 20th century British culture, to tie-in with a major exhibition at IMMA; and the return of the occasional look at the work of forgotten filmmakers, Hidden Figures, which will this year centre on American Dorothy Arzner (1897-1979), the only female director in Hollywood in the 1930s, who launched the careers of many of the era’s finest talents including Katherine Hepburn. 2019 will also bring the third Dark Skies Science Fiction season, headlined by a 70mm screening of James Cameron’s Terminator 2: Judgment Day; IFI remains the only cinema in Ireland with the facilities to screen this format.

Speaking at the programme’s announcement, IFI Director Ross Keane, said: ‘We are delighted with the programme of activities planned for 2019 which offer breadth, balance and variety. Alongside some exciting new programming concepts and events, the launch of key archival preservation projects, and the expansion of film clubs to even more schoolchildren around the country, this year will also see the most transformational change to the IFI’s main home in Temple Bar since the last major redevelopment back in 2009. We look forward to unveiling our wonderful new facilities the summer, and offering our audiences the opportunity to enjoy our curated events and programmes in even better surroundings.’

Irish filmmakers and their work will remain central to the IFI’s focus throughout the year with seasons including Neglected Perspectives, a timely selection of films, co-curated by director Donal Foreman, looking at work that challenged the prevailing representations of the Northern Ireland Troubles; the work of Trish MacAdam, director of Snakes and Ladders, Hoodwinked and What Do I Do Now? will take centre-stage with a retrospective and a career-spanning public interview; while the IFI’s ongoing collaboration with Dublin City Council will continue with the Edna O’Brien Trilogy, featuring screenings of The Country Girls, Girl with Green Eyes and I Was Happy Here. The agenda-setting IFI Spotlight day will return, alongside the regular free Archive at Lunchtime programmes, and the monthly From the Vaults and Irish Focus strands.

Throughout its entire exhibition programme the IFI will, where possible, aim to make its screenings as accessible as possible, either through improved access to screens, or via scheduled Open Captioned and Audio Described showings.

2019 promises to be another key year for the award-winning IFI Irish Film Archive. This summer will see the launch of the second part of the Irish Independence Film Collection which has repatriated newsreels from international news crews, bringing material that relates to one of the most important periods in Irish history back home, where it belongs, and presented to audiences for free on the IFI Player. Meanwhile, in April, the release of the Loopline Collection will make public on the IFI Player and the IFI Player app the exceptional documentary output of the pioneering Irish production company established by Sé Merry Doyle.

Other exciting Archive projects include a second collaboration between the IFI Irish Film Archive, Screen Scene and the Radharc Trust, which will see 50 Radharc films digitally preserved and remastered; this project is co-funded via the BAI Archiving Scheme. The autumn will see the commencement of a unique project to preserve a large collection of broadcast material created by the community production company Ballymun Communications.

The IFI’s education plans for the year start early in February with the second annual Careers In Screen Day, presented in association with Virgin Media Dublin International Film Festival; this year’s event will feature guests including director Lenny Abrahamson, costume designer Consolata Boyle, and producer Ed Guiney. The hugely popular and comprehensive 2019-2020 Schools Programme will launch in September, with the second phase of the Film Clubs initiative running in schools until June 2019; the third and final phase will begin in September. The IFI’s commitment to lifelong learning continues with spring and autumn Evening Courses, which will focus on British and Asian cinema respectively.

Regular audience favourites The Bigger Picture, IFI Family, aemi, Wild Strawberries and Feast Your Eyes will all return, while Mystery Matinée will continue to go from strength-to-strength in its monthly Sunday lunchtime slot.

IFI will continue its programme of exciting and exclusive 70mm events throughout the year, and IFI Open Day will return after the refurbishment of the IFI’s two biggest screens for another day of free screenings and behind-the-scenes tours.

IFI will continue its vast programming in IFI National and IFI International strands, bringing the best of local cinema to communities across the country with Local Films for Local People programmes travelling to counties including Leitrim, Fermanagh, Cork, Sligo and Galway. IFI National is also delighted that its collaboration with Limerick arts venue Belltable will continue into 2019. Once again, IFI International, in collaboration with Culture Ireland, will bring the very best of Irish cinema to cities and countries across the world including China, Russia, Italy, Serbia, Australia, Singapore, Canada and Brazil.