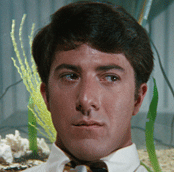 The Irish Film Institute announces a­ retrospective of the work of Oscar-winning actor Dustin Hoffman from June 10th-25th to coincide with the 50th anniversary re-release of The Graduate.

Dustin Hoffman’s breakthrough hit, The Graduate, returns to screens on Friday, June 23rd, to coincide with the 50th anniversary of its 1967 release. Mike Nichols’s now-iconic film centres on a young college graduate who is seduced by an older woman, and then falls in love with her daughter. Nine other films will be screened over a two-week period showcasing the best performances from Hoffman’s illustrious career.

On June 15th, Hoffman delivers an electrifying performance as comedian Lenny Bruce in Bob Fosse’s Lenny. Bruce, the stand-up comedian whose focus on social satire, was the forerunner of controversial greats such as George Carlin and Bill Hicks; Hoffman received his third Oscar nomination for his performance.

Two titles in the season will be shown on 35mm prints. Papillon, one of cinema’s great prison films, screens on Sunday, June 18th. Co-starring Steve McQueen, the film focusses on two prisoners who form an alliance of convenience before eventually becoming friends. Also showing in 35mm will be Ulu Grosbard’s 1978 film, Straight Time. Based on a novel by Edward Bunker, the film sees Hoffman play Max Dembo, an ex-con trying to make it in the outside world.

Alan J Pakula’s Oscar-winning All the President’s Men returns on Thursday, June 22nd. Journalists Carl Bernstein (Hoffman) and Bob Woodward (Robert Redford) of the Washington Post work together on what initially appears to be a minor story of little import, a break-in at Washington’s Watergate Hotel in 1972. Their investigation led to the eventual downfall of the Nixon administration.

In Tootsie, directed by Sydney Pollack, Hoffman plays Michael Dorsey, an actor struggling more because of his difficult reputation than lack of talent. Desperate for work, he poses as ‘Dorothy Michaels’ in an audition for a daytime soap opera. Featuring a wondering comic turn from Hoffman, Jessica Lange won an Oscar for her role as actress Julie Nichols. The film screens on Saturday, June 24th.

Hoffman’s two Oscar-winning performances will also be shown during the season, both on Sunday, June 25th. Hoffman received his first golden statuette for his performance as workaholic Ted Kramer in Robert Benson’s Kramer Vs. Kramer. When his wife, Joanna (Meryl Streep), walks out, Kramer is forced to take care of his young son alone. In Rain Man,Hoffman plays autistic savant Raymond Babbitt, the older brother of Charlie (Tom Cruise); Charlie searches out his long-lost sibling, when he learns that Raymond is the major beneficiary of their father’s estate. The film went on to win four Oscars, including Best Picture.

Tickets for these screenings are available now at www.ifi.ie or by calling the IFI Box Office on 01 – 6793477.