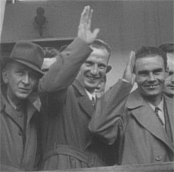 IFI National’s Local Films For Local People programme, now in its fourth year, returns for another nationwide tour of treasures from the IFI Irish Film Archive

May 3rd, 2017: After a hugely popular programme in 2016, the Irish Film Institute will once again tour nationwide with films from the collections of the IFI Irish Film Archive. Throughout the year, programmes of local interest will be presented in cinemas and arts centres around the country, providing an accessible route to film heritage for a broad range of audiences. The programmes include both professional and amateur films documenting domestic life, school days, agriculture, industry, sport, music and much more. Some of the programmes, which date from the earliest days of cinema to recent times, include cine-concerts featuring silent films accompanied by local musicians.

The programme starts in Co. Cavan on May 9th with Cavan on Camera at the Ramor Theatre in Virginia. The programme will include a wealth of sporting material including a British newsreel of Kerry playing Cavan in 1937, rare footage of the Cavan team’s journey to the US and their glorious victory against Kerry in the Polo Grounds in New York in 1947, fascinating films about life in Killeshandra and further afield made by the Missionary Sisters of the Holy Rosary in the 1950s, and the traditional Irish Power Dancers from Co. Cavan as they accompany Bing Crosby singing songs of the Emerald Isle. The selection of films is being presented as part of the Ramor Theatre’s Bealtaine Festival celebrations.

Minister for Arts, Heritage and the Gaeltacht, Heather Humphreys T.D., will also attend the Ramor Theatre launch on May 9th. Speaking about the programme, Minister Humphreys commented, “This wonderful initiative from the IFI brings fascinating footage from the IFI’s archive to local audiences around the country. I am particularly keen to see our Dublin-based national organisations expanding their reach as much as possible, so it’s great to see the IFI sharing our film heritage with a regional audience. Film fans in Cavan, Wexford, Carlow, Galway and Limerick will be able to view reels of their own local film heritage on the big screen and in the process will no doubt learn something new about their own community and its history. I would like to commend the IFI for this great project, and I am personally very much looking forward to seeing some rare footage from Cavan dating from the 1930s, 1940s and 1950s.”

Sunniva O’Flynn, Head of Irish Film Programming at the IFI, added: “As we roll out our fourth year of Local Films for Local People, we look forward to welcoming yet more audiences to revisit their shared past through a range of archival films made in and about their county. It is a privilege to be entrusted with the preservation of community memories in the IFI Irish Film Archive, and to provide a conduit to these memories through this nationwide screening programme. We look forward to presenting these films which are sure to provoke curiosity, delight, and perhaps a little melancholy for people and places gone by.”

On May 29th, to celebrate the centenary of the birth of John F Kennedy, we present Down Wexford Way at St Michael’s Theatre in New Ross. The programme will include amateur and professional film of President Kennedy’s visit to the county, plus a wide range of Wexford-based material dating from 1902. Footage includes early British cinema pioneers filmed on the streets of Wexford Town, a rarely seen film of New Ross in 1947, a host of lively stories from the Amharc Éireann newsreels including a Fleadh Ceoil in Gorey, the visit of General ‘Ike’ Eisenhower, and a surprise win for Wexford in the 1960 All-Ireland Senior Hurling Championship.

On June 9th, the IFI travels to the Visual Centre for Contemporary Art in Carlow to present a screening of Carlow on Camera as part of the Carlow Arts Festival (June 7th to 13th). Dating from the 1930s to the present day, Carlow on Camera creates a vibrant social history of the county and a colourful kaleidoscope of years gone by. It includes Activities of Carlow Town (1935-1958), made by Fr Jackie Moran, Radharc’s documentary about Pattern Day in St Mullins (1966), Gael Linn’s Amharc Éireann newsreels of the county from the 1960s, and the elegiac What Remains (2013), co-directed by Carlow filmmaker Tadhg O’ Sullivan. The programme highlight will be the modern-day Irish premiere of the recently re-discovered silent boarding-school drama Some Say Chance, directed by Carlovian Michael Farrell in 1935, with live accompaniment by internationally renowned cellist Kate Ellis.

We head west in July and return to the Galway Film Fleadh by popular demand, with our fourth Glimpses of Galway event. Featuring a colourful raft of new material, the programme will include fiction and non-fiction films made in Galway and environs from the 1930s to the 1970s. Amateur collections will document summer holidays, visit the Aran Islands, and capture long-gone agricultural practices. Meanwhile, professional films show courtship classes in Glenamaddy, an Atlantic fishermen’s strike, and a wealth of sporting fixtures. A more localised programme will bring archival treasures from Connemara with films documenting life in Carna, Kylemore, amongst other villages.

Later in the year, on September 22nd, the IFI will visit Limerick’s Belltable for a screening of Limerick Through a Lens, a programme of films, both amateur and professional including a newsreel of the Fall of Limerick in 1922, the building of Shannon Industrial Estate, celebrities arriving into Shannon, and a family film of a visit by Éamon De Valera to his homestead in Bruree in 1952.

The Irish Film Institute is Ireland’s national cultural institution for film. It provides audiences throughout Ireland with access to the finest independent Irish and international cinema; it preserves and promotes Ireland’s moving image heritage through the IFI Irish Film Archive; and it provides opportunities for audiences of all ages and backgrounds to learn and critically engage with film.

ABOUT LOCAL FILM FOR LOCAL PEOPLE

The Local Films for Local People Project sees collections of local-interest films being brought back to the communities in which they were made. This annual programme, launched in 2014, will this year travel to Cavan, Wexford, Carlow, Limerick and Galway.

The IFI is custodian of Ireland’s unique moving image heritage. As the home of the national collection of moving image, the IFI Irish Film Archive is at the centre of this activity, comprising a collection of over 30,000 cans of film and 10,000 broadcast tapes documenting Ireland’s past and present from 1897 to the present day, chronicling the social, political and cultural development of modern Ireland. The mission of the IFI Irish Film Archive is to acquire, preserve and provide access to Ireland’s moving image collections and associated materials for the benefit of current and future generations.