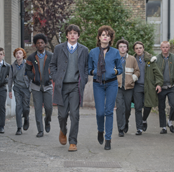 March 6th 2017: To coincide with St Patrick’s Day events across the globe, IFI International programmes will visit a number of film festivals to screen homegrown hits such as A Date for Mad Mary, Sing Street, The Queen of Ireland, and Mattress Men. Irish talent will also traverse the globe, with a number of actors, directors and writers present at screenings, including Seána Kerslake at the Moscow Irish Film Festival to present A Date for Mad Mary, Conor Horgan visiting the Irish Film Season at the Danish Film Institute with The Queen of Ireland, and Maria Doyle Kennedy travelling to Buenos Aires with Sing Street and Eliza: Queen of Paraguay.

Commenting on March’s strong event programme, Head of Irish Film Programming, Sunniva O’Flynn, said, “Bracing ourselves for the annual St Patrick’s onslaught of film festival activity, we look forward to providing international audiences with some powerful new dramas and a particularly strong slate of new feature documentaries. These programmes are sure to enhance understanding of Irish culture and to increase appetites for new Irish cinema”.

In collaboration with the Embassy of Ireland, Argentina, the Irish Film Programme at the National Audio Visual Authority of Argentina (INCAA) will present ten Irish films, both old and new, including Once, Sing Street, Ryan’s Daughter and Eliza: Queen of Paraguay. The festival runs from March 16th to 22nd and actress Maria Doyle Kennedy (Eliza: Queen of Paraguay) will attend, along with director Aoife Kelleher who will present One Million Dubliners and Strange Occurrences in a Small Irish Village.

IFI International teams up with the Danish Film Institute (DFI) and the Embassy of Ireland, Denmark, to present an Irish Film Season running from March 2nd until March 15th. The season opened with John Carney’s Sing Street and will close with Conor Horgan’s The Queen of Ireland. Conor Horgan will be on hand to present his documentary about drag artist Panti Bliss, while Risteard O’Domhnaill will attend with his documentary, Atlantic.

Shebeen Flick, the Irish film festival in Berlin and Düsseldorf, will open on March 16th with the German premiere of History’s Future, a German-Irish co-production, presented in the presence of lead actor Mark O’Halloran (Adam and Paul, Viva). The festival will screen a total of 25 feature and short films, which represents a doubling of last year’s slate. Festival highlights include screenings of Benjamin Cleary’s Oscar-winning short, Stutterer, Colm Quinn’s Mattress Men and A Date for Mad Mary, directed by Darren Thornton who will also attend the festival.

The Moscow Irish Film Festival celebrates its 10th anniversary this year with a wide-ranging programme of screenings including The Butcher Boy and My Left Foot, and more recent releases Room and Brooklyn. Directors Peter Murphy and Rachel Moriarty will present Traders, Richie Smyth will screen The Siege of Jadotville, and actress Seána Kerslake will introduce with A Date for Mad Mary. The festival opens on March 15th at Karo 11 Oktyabr with a screening of Sing Street, and runs until March 26th.

The Boston Irish Film Festival (BIFF) runs this year from March 23rd to 26th with a wide-ranging programme including Mattress Men, Des Henderson’s award-winning documentary How to Defuse a Bomb: The Project Children Story, and Liam McGrath’s Paddy Moloney: Chieftain. The winners of the 2017 BIFF Awards have also just been announced: Peter Foote’s The Young Offenders has been named Best Breakthrough Feature, Ian Hunt Duffy’s Gridlock has been awarded Most Inspiring Short Film, Michael Fanning’s Rocky Ros Muc is this year’s Most Inspiring Documentary, the Director’s Choice Short is awarded to Natasha Waugh’s Terminal and the Director’s Choice Feature Award is Darren Thornton’s A Date for Mad Mary. Actors Seána Kerslake and Tara Lee will attend the festival for the presentation of A Date for Mad Mary.

Other festivals running in March include the fifth Belgrade Irish Film Festival running 6th – 22nd March and featuring a workshop with David Caffrey, the award-winning director of Divorcing Jack and Love/Hate. The festival this year has a decidedly rock’n’roll feel with films such as Frank, Good Vibrations and Ghost Blues: The Story of Rory Gallagher.

Elsewhere, the Irish Film Festa, Rome runs from March 30th to April 2nd, while the St Patrick’s Film Festival London, running from March 17th to 19th, includes screenings of Traders, The Young Offenders, and Song of the Sea.

Finally, the Irish Festival in Hong Kong runs until March 11th, with a focus on Irish animation in collaboration with Animation Ireland. It includes a programme of shorts and an animation workshop presented by Steve Woods and Moe Honan.

IFI International is supported by The Arts Council and Culture Ireland.