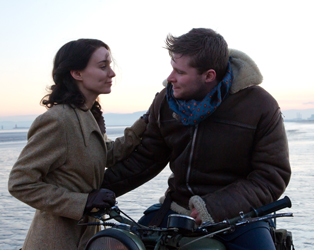 Following a sold-out premiere screening at this year’s Audi Dublin International Film Festival, The Secret Scripture will open at the Irish Film Institute on Friday, March 24th. Director Jim Sheridan will attend the opening night screening at 20.15, which will then be followed by a Q&A.

After an eclectic range of films in recent years, Jim Sheridan (My Left Foot, In America) returns to Ireland with this adaptation of Sebastian Barry’s acclaimed novel. Rose (played the inimitable Vanessa Redgrave) is the last patient remaining in a psychiatric hospital, firmly refusing transferal to another facility. Dr. William Grene (Eric Bana) is called in, and his sympathetic approach leads Rose to recount the story of how, as a young woman (Rooney Mara) in Sligo, she met and fell in love with Michael McNulty (Jack Reynor), arousing the jealousy of the local priest.

Directed with a sure hand, this is a touching and poignant story, with an undertow of anger at Rose’s treatment, and that of so many women of her time.

Tickets for the opening night screening of The Secret Scripture + Q&A are now on sale from www.ifi.ie and the IFI Box Office – 01-6793477.

ABOUT DIRECTOR JIM SHERIDAN
Jim Sheridan is an Irish playwright, screenwriter, film director, and film producer. In the years from 1989 to 1993, Sheridan made three acclaimed films set in Ireland (My Left Foot, The Field, and In the Name of the Father) that between them received a remarkable 13 Academy Award nominations. Sheridan has personally received six Academy Award nominations. In addition to the above-mentioned films, he is also known for the films The Boxer and In America. His short film 11th hour, premiered at the Dublin Arabic Film Festival, a festival he curates, in November at the IFI.