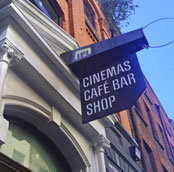 January 26th 2017: The Irish Film Institute today unveiled its exciting plans for 2017 across its core areas of exhibition, preservation and education. The year ahead brings new programming events, seasons, and partnerships, alongside festival favourites, key film strands, and the continued development of the hugely successful IFI Player.

The Irish Film Institute has announced its plans for 2017, its 25th year in Temple Bar, including key retrospectives focusing on the work of John T. Davis, Aisling Walsh and Robert Bresson; seasons celebrating works of the Czech New Wave and the Weimar Republic; a new Science Film Festival; a number of exclusive 70mm screenings; and the return of its comprehensive year-long festival and event schedule.

Speaking at the programme’s launch, IFI Director, Ross Keane, said: ‘This year, the IFI is pleased to be celebrating the 25th anniversary of its home here in Temple Bar, and to mark the occasion, we’re delighted to unveil some of our exciting plans for 2017 across our three core areas of exhibition, preservation and education. 2017 looks set to be another big year in the history of the organisation and we hope our audiences continue to experience and enjoy the many highlights we have lined up.’

As always, the IFI programme includes a unique slate of specialist seasons designed to introduce films from around the world to its audiences. In addition to our French, Arabic and Polish film festivals, this year will see IFI celebrate the Czech New Wave, with a season of films including Jirí Menzel’s Oscar-winning Closely Observed Trains, Miloš Forman’s The Fireman’s Ball, and Jan Němec’s Diamonds of the Night. Also scheduled for 2017 are seasons of films from Robert Bresson (The Trial of Joan of Arc, L’argent, Au hasard Balthazar) and cinema from the Weimar Republic, including F.W. Murnau’s Nosferatu and Faust.

Our ongoing commitment to showcasing the best of Irish filmmaking continues with seasons dedicated to one of Northern Ireland’s most distinctive filmmakers and documentarians John T. Davis, and contemporary writer-director Aisling Walsh, whose work includes the multi-award winning Song for a Raggy Boy, The Daisy Chain, and new film, Maudie.

IFI will continue to invest in its strong IFI National and IFI International strands, bringing the best of local cinema to communities across the country through our Local Films for Local People initiative, and Irish national cinema to festivals all over the world; this year IFI International will tour programmes to the Moscow Irish Film Festival, the Sydney Irish Film Festival, and the Irish Film Retrospective in Argentina. 2017 will also see IFI strengthen its collaborative relationships with a number of key cultural partners and events, including the Audi Dublin International Film Festival, Plastik Festival in partnership with Temple Bar Gallery + Studios and IADT Dublin, the Irish Architecture Foundation, Bealtaine, and Dublin City Libraries One City One Book.

To coincide with IMMA’s As Above, So Below exhibition, the IFI will present a programme of screenings with introductions facilitated by IMMA. February will also see a screening of Duncan Campbell’s The Welfare of Tomás Ó Hallissy, followed by a conversation with Campbell and Sarah Glennie, Director of IMMA. For this film, also showing at IMMA until May, Campbell drew from material he encountered while researching at the IFI Irish Film Archive.

This year will see our first annual IFI Science Film Festival, in a new collaboration with the Science Gallery Dublin. A series of screenings over a weekend in July will be presented alongside introductions and a panel discussion curated by Science Gallery. Each year will focus on different themes such as robotics, artificial intelligence, and space flight.

2017 will also see the continued development of IFI Player, which has to-date received over 57,000 unique visitors since its launch last September. Alongside the monthly additions to the platform’s content, the first part of the year will see the release of a large collection of restored television advertisements from the 1960s, 1970s and 1980s; this large scale conservation, digitisation and cataloguing work has been made possible through a grant from the Broadcasting Authority of Ireland (BAI).

Developments for the IFI Irish Film Archive will include the long-awaited opening later this year of the Preservation and Research Centre at Maynooth University which will significantly increase capacity for preservation and acquisition.

Other exciting Archive projects include an initiative to catalogue, digitise, and preserve a large collection belonging to the Loopline production company; comprising over 40 documentaries, the films explored diverse subject areas such as folklife, ethnology, architecture, literature and inner city life. This year will also see the culmination of a project to acquire and preserve Newsreel material documenting events associated with Ireland’s struggle for independence in the period 1914-1924. With financial support from the 1916 Project Office, high resolution digital copies have been made from original film materials held by the British Film Institute and British Pathé. This material the will be curated into a single collection, the Irish Independence Film Collection, and will be made available in Ireland for the first time, via the IFI Player.

Our education plans continue to be an area of particular focus; our full-year 2017-2018 Schools’ Programme will launch in September, while two Evening Courses in March and in October will focus on Russian cinema and comedy respectively. Our Junior Cycle Short Course in film will also be launched and available at the beginning of the new school year. We will also continue our Accessible Cinema pilot, providing greater access to the IFI programme, through Open Captioned and Audio Described screenings.

A principal new initiative in 2017 will be a Careers Event which will focus on connecting young people with the Irish Film Industry through a film-based careers focus day at IFI. Held in conjunction with the Irish Film Board, the event will raise awareness of the various aspects of the industry, from animation to filmmaking, and from costume to sound.

Spotlight, our annual day-long in-depth critical engagement with current Irish media culture, will return in April, while Investigations, our annual event exploring the challenges of bringing controversial stories to the large and small screen, and held in association with the Mary Raftery Journalism Fund, will return in October. The perennially popular IFI Open Day will move to September, to coincide with the IFI’s 25th anniversary in Temple Bar.

Finally, as Ireland’s only screening house for 70mm prints, we’re delighted to announce that IFI will also host a number of exciting and exclusive screenings in this format including Tim Burton’s 1989 classic Batman in March, and Christopher Nolan’s highly-anticipated World War II epic, Dunkirk, in July.