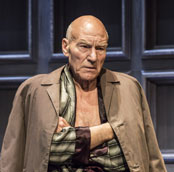 The IFI presents a National Theatre Live screening of No Man’s Land on Thursday, December 15th at 7 p.m followed by an exclusive Q&A.

The Irish Film Institute presents a National Theatre Live screening of Harold Pinter’s No Man’s Land with Ian McKellen and Patrick Stewart on Thursday, December 15th at 7 p.m followed by an exclusive Q&A with director Sean Mathias and the cast.

Following their hit run on Broadway, Ian McKellen and Patrick Stewart return to the West End stage in Harold Pinter’s No Man’s Land, broadcast live to the IFI from Wyndham’s Theatre, London.

One summer’s evening, two ageing writers, Hirst and Spooner, meet in a Hampstead pub and continue their drinking into the night at Hirst’s stately home nearby. As the pair become increasingly inebriated, and their stories increasingly unbelievable, the lively conversation soon turns into a revealing power game, further complicated by the return home of two sinister younger men.

Director Sean Mathias and the cast will participate in an exclusive satellite Q&A following the screening.

Sean Mathias is a British theatre director, film director and writer. He has worked at the Royal National Theatre, the West End, the Kennedy Centre, The Mark Taper Forum, Off-Broadway and many times on Broadway, as well as Paris, Sydney, Cape Town, Johannesburg and Los Angeles.Sean has written a number of plays including the award winning A Prayer for Wings, and the screenplay for the award winning BBC film The Lost Language of Cranes. Sean is currently directing a stage version of The Exorcist at the Birmingham Repertory Theatre.