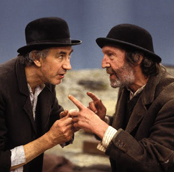 The Irish Film Institute presents a screening of David Blake Knox’s The Waiting Game on Tuesday, December 6th at 6.30 p.m

November 29th, 2016: The Irish Film Institute will present a screening of David Blake Knox’s The Waiting Game on Tuesday, December 6th at 6.30 p.m. and are delighted to welcome actors Barry McGovern and Stephen Brennan, producer Michael Colgan, and director David Blake Knox to attend a Q&A following the screening. In 2008, a troupe of seasoned players set off on the most ambitious theatrical tour of Ireland ever undertaken. Stephen Brennan, Alan Stanford, Barry McGovern and Johnny Murphy had first performed Samuel Beckett’s Waiting for Godot at the Gate Theatre in 1988 and reprised their roles many times since. For this 20th anniversary tour the play would be performed in 40 venues in 32 counties across Ireland.

David Blake Knox’s film for RTÉ reveals the physical demands, the boredom, the laughter, and the friendship that sustains the players across the thousands of miles and many weeks on the road. The tour was also to be Johnny Murphy’s swansong.

David Blake Knox has worked for RTÉ in Dublin, the BBC in London, and HBO in New York. He was Head of Drama and Entertainment at RTÉ, as well as Director of TV Production before he joined the BBC. At the BBC, he was Executive Editor of Special Projects in TV Entertainment. TV work includes Nighthawks, The Hanging Gale, and Roddy Doyle’s Family. His film credits include A Love Divided. He founded Blueprint Pictures in 2002 and is its current CEO.

Michael Colgan has been Director of the Gate Theatre since 1983. In his time at the venue, he has overseen a number of award-winning productions and critically-acclaimed festivals. In 2016, he announced his intention to step down from his role at the theatre after 33 years.

Barry McGovern is a theatre, film, radio and television actor. His film work includes Braveheart, The General and Far and Away. He has appeared on television in Game of Thrones, The Tudors and Ballykissangel, and his theatre credits include Glengarry Glen Ross, Death of a Salesman, and An Enemy of the People.