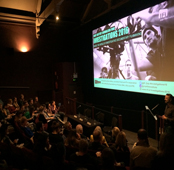 Following hugely successful events in 2014 and 2015, the IFI partnered again with the Mary Raftery Journalism Fund for a day of screenings, masterclasses and debate. Investigations 2016 explored the challenges of bringing controversial, complex and often conflicting stories to the large and small screen.

The Power to Change Lives: Legal and Ethical Issues to Consider Before you do.
Chaired by journalist and broadcaster, Áine Lawlor. Conor Horgan (Director, The Queen of Ireland), Andrea Martin (Media Lawyer) and Ides Debruyne (Managing Director, journalismfund.eu) teased out the challenges of bringing controversial and sensitive stories to the screen