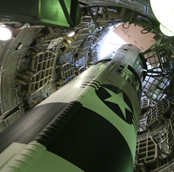 IFI to screen Robert Kenner’s Command and Control in association with The Department of Foreign Affairs on Thursday, December 1st at 6.30 p.m.

The Irish Film Institute (IFI) will partner with the Disarmament and Non-Proliferation Unit of the Department of Foreign Affairs and Trade to present a screening of Robert Kenner’s documentary Command and Control. Based on Eric Schlosser’s acclaimed book of the same name, the film is a shocking exposé of an incident in rural Arkansas in September 1980 that saw the near-release of the United States’ largest ever nuclear warhead. The screening will take place on Thursday, December 1st at 6.30 p.m.

Tickets for the screening of Command and Control are now on sale here and the IFI Box Office – 01-6793477.