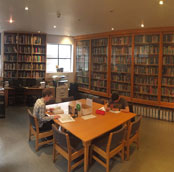 November 11th 2016: The Irish Film Institute (IFI) has announced its annual Library and Archive Student Open Day. This year’s event will take place on Thursday, November 24th, and will coincide with the Archives and Records Association of Ireland ‘Explore Your Archives’ campaign. The Open Day aims to raise awareness of the IFI’s library and archive facilities, and to highlight their position as key academic resources for students of film in Ireland.

Every year, the Open Day provides a great opportunity for film and media students to peruse the library’s catalogue of 3,000 titles, take a tour of the library, and explore some highlights of the IFI Irish Film Archive’s extensive paper collection of posters, stills, press cuttings, and rare behind-the-scenes material.

Each year, the IFI Library, named for producer Tiernan MacBride, assists hundreds of students and researchers every year, and holds the largest collection of film-related publications in Ireland. The library’s collection not only comprises the book and paper archive collection, but also a journal collection, which contains an authoritative inventory of Irish and international journals, and the clippings collection, a unique resource consisting of Irish film-related media clippings from national and international newspapers. In total, the library holds nearly 20,000 archival documents relating to Irish film.

Since 1986, the Irish Film Archive has acquired, preserved and made publically available Ireland’s moving image heritage and related materials and built up an authoritative collection of film, predominantly made in or about Ireland, or by Irish producers abroad. The vast array of content available includes feature films, short films, documentaries, newsreels, travelogues, government information films, commercials, and animations. The archive is a hugely valuable resource for anyone studying Irish film history or heritage.

On the day, students will also have the opportunity to avail of special student annual subscriptions rates to the library and archive which entitle holders to a range of amazing benefits, including discounts on viewings at the Irish Film Archive and savings at the IFI Bookshop.

For more information on the Open Day or to make a booking, please contact Felix Meehan, Special Collections and Library Manager on fmeehan@irishfilm.ie or 01-6795744.

ABOUT THE TIERNAN MACBRIDE LIBRARY

The Tiernan MacBride Library is home to a substantial book, journal, clippings, and paper archive collection. Annual membership costs €15 for students, and €20 for the general public.

Part of the Irish Film Archive’s film collection consists of over 6,000 reference DVDs and VHS tapes as well as thousands of accessible broadcast quality transfers of items held in our vaults. These can all be accessed and viewed in our public viewing facilities which can display footage on a variety of formats including DVD, VHS, Beta Sp, Digi Beta and mini DV.

The Viewing Room of the archive is open Monday to Friday from 10.15-1.00 and from 2.15-5.30, however use of the facilities is strictly by appointment and viewing fees apply.