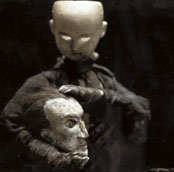 This October two fantastic documentaries open exclusively at the IFI. From October 7th, The Quay Brothers meet Christopher Nolan sees two of the world’s most original filmmakers, identical twins Stephen and Timothy Quay, meet one of the most visionary directors of recent times, Christopher Nolan.

Also opening exclusively at the IFI on October 14th is Robert Greene’s Kate Plays Christine, a documentary based on 29-year-old Florida-based television reporter Christine Chubbuck who, in July 1974, shot and killed herself live on air in the opening segment of her own talk show.