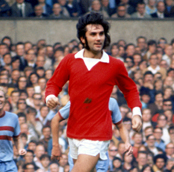 October 24th 2016: The 1970 film by German director Hellmuth Costard, Football As Never Before (Fussball wie noch nie), will have a rare screening in the Irish Film Institute (IFI) on November 6th at 8pm as part of the Institute’s ‘From the Vaults’ series.

The film is a hypnotic portrait of Manchester United legend George Best, for which Costard trained eight 16mm cameras on the revered footballer over the complete course of a match against Coventry City. A predecessor of Douglas Gordon and Philippe’s Parreno’s acclaimed 2006 documentary Zidane: A 21st Century Portrait, Football As Never Before was made at the height of Best’s fame and tabloid notoriety, and focuses on his every move as he warms up pre-match, at times looking restless and bored, and then on-the-pitch as he waits to unleash his genius.

The film will be accompanied by a new improvisational score prepared by Matthew Nolan of 3epkano, and will be played live by Nolan along with David Stalling (lap steel guitar / electronics), Seán Mac Erlaine (woodwinds, vocals and electronics), Bryan O’Connell (drums/percussion), Kevin Murphy (Cello) and Mary Barnecutt (cello).

Football As Never Before is legendary among soccer aficionados and one of the great works of post-WWII German cinema, but few have actually seen it as it is rarely screened. Its director, Hellmuth Costard, was part of the vibrant New German Cinema movement of the 1960s and 1970s that revitalised and revolutionised German film. His work ranged from experimental films to documentaries and from children’s television to magazine cartoons.

Curator of the Football As Never Before project, Matthew Nolan, added. ‘The specific aim here is to offer a celebration of a sporting icon which looks to return Best to that arena where he was peerless. There is something quite pure about Costard’s film and, given how the media distorted Best’s image in later years, it feels only proper that an attempt is made to get back to the sublimely gifted footballer. Costard’s approach here demands subtlety in terms of musical accompaniment and what we do is reflective of that need.”

MATTHEW NOLAN
Matthew Nolan is a Dublin based musician, composer, and academic. He was the founder and artistic director of 3epkano, an acclaimed instrumental music ensemble who specialise in the production of original music for movies from the silent era. Matthew has worked on commissions from a range of prestigious performing arts institutions and arts organisations, including: The Jameson Dublin International Film Festival, Kilkenny Arts Festival, Dublin Fringe Festival, National Gallery of Art, Cork and Dublin French Film Festivals, Brooklyn Academy of Music in New York, Cork Midsummer Festival, Film Society at the Lincoln Centre in New York, and the National Gallery of Art in Washington DC. He has also composed new music for several award winning Irish films over the last ten years, including, Exile in Hell, Runners, and Somewhere Down the Line. He teaches Film Studies at Dublin Business School and Trinity College Dublin. He plays electric guitar, piano, and synthesiser.

Football As Never Before will also tour to the U.K. as part of the IFI International programme. The film will screen at HOME Manchester on November 22nd at 6.30pm.

The screening at the IFI is supported by the Goethe Institute.