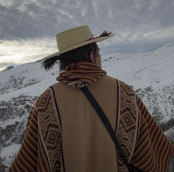 Q&A with directors Joe Lawlor & Christine Molloy following a screening of their new film Further Beyond on Friday, Oct 21st at 6.20pm

The Irish Film Institute is delighted to welcome directors Joe Lawlor and Christine Molloy to participate in a Q&A following a screening of their new documentary Further Beyond on Friday, October 21st at 6.20 p.m.

Having previously screened at both the Galway Film Fleadh and The Audi Dublin International Film Festival, the IFI is delighted to now be exclusively showing Further Beyond from Friday, October 21st and will welcome directors Christine Molloy and Joe Lawlor to participate in a Q&A following the 6.20 p.m. screening of the debut feature documentary.

In Further Beyond, we retrace Ambrose O’Higgins’s (Aiden Gillen) remarkable journey from Ireland to Chile. Father of Bernardo O’Higgins, the first leader of independent Chile, he visits key locations in his life – a lake in Sligo, a field in Meath, the port of Cadiz, and the edge of a snow-covered mountain in the Andes – and speculates on the idea of place and what O’Higgins and his journey embodies.

Between 2003 and 2010 Molloy and Lawlor wrote and directed ten acclaimed short films including the award winning Who Killed Brown Owl and Joy. Helen, their award winning debut feature, premiered at the Edinburgh International Film Festival (EIFF) in June 2008 before screening at over 50 film festivals worldwide. Their second feature film Mister John, starring Aidan Gillen, also premiered at the EIFF in June 2013 and was released in the UK and Ireland by Artificial Eye.  Further Beyond, their debut documentary, has screened at various festivals nationally and internationally. Molloy and Lawlor live in London  with their daughter.

Tickets for this screening+Q&A are available now here  or by calling the IFI Box Office on 01-6793477.