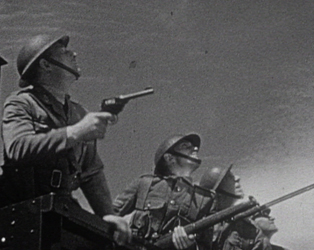 October 27th 2016: Rounding off a busy year of screenings commemorating the events of 1916, IFI International will present a series of events exploring Anglo-Irish cultural exchange in a range of venues throughout the UK this November. The programmes include contemporary and retrospective screenings of feature, documentary and short films, ciné-concerts and seminars.

Commenting on this exciting slate, Head of Irish Film Programming, Sunniva O’Flynn, said, ‘Thanks to the support of Culture Ireland we have curated a vibrant series of 1916 Centenary film programmes which interrogate the complex cultural and political relationship between Ireland and the UK.  It has been particularly rewarding to delve into our own Archive and into the collections of the British Film Institute to identify films presenting alternating points of view on our shared history.’

The highlight of the month’s activity will be ‘Ireland and Britain, 1916-2016: A Centenary of Cinematic Conversation’, a programme co-hosted by IFI and Irish Film Festival London festival that runs from November 3rd to 26th at London’s Ritzy Picturehouse, at the Barbican, and at Birkbeck University.

On November 24th, at the Barbican, we present the 1916 Centenary Ciné-Concert, a programme of short silent films tracing the history of Anglo-Irish relations during the revolutionary period and beyond, with live musical accompaniment by harpist Cormac de Barra, and Kila’s Colm Ó Snodaigh and Rossa Ó Snodaigh.

Six films will show at the Ritzy Picturehouse in Brixton. The strand opens with one of the most significant films of the Irish silent film canon, Denis Johnston’s Guests of the Nation (1935), which is based on a Frank O’Connor short story set during the Anglo-Irish war. This film, preserved and restored by the IFI Irish Film Archive will be presented with live musical accompaniment by Josh Johnston, renowned pianist, composer, and grandson of the film’s director.

Also showing in the season will be whimsical Ealing comedy Let’s Be Famous (1939); Daughter of Darkness (1948) which features Siobhán McKenna in her first starring role on screen; She Didn’t Say No (1958), a controversial film about illegitimacy and scandal in a small Irish village; and I Was Happy Here (1965), a film written by Edna O’Brien, which examines an Irish immigrant’s (Sara Miles) failing marriage to an English doctor.

On November 26th, at Birkbeck University Cinema, a day of screenings and discussion will include films by directors Pat Murphy, Vivienne Dick, and Polly Devlin, with directors in attendance.

Hot on the heels of ‘Ireland and Britain, 1916-2016’, the contemporary strand of the Irish Film Festival London kicks off on November 23rd and runs through to November 27th. It takes place in five cinemas across the capital including the Tricycle Cinema and the Regent Street Cinema, and the will open with a screening of Darren Thornton’s runaway hit A Date for Mad Mary.

Further north, in Manchester, IFI International will host a ciné-concert on November 22nd in the HOME Arts Centre. Football As Never Before is a hypnotic portrait of Manchester United legend George Best, for which director Hellmuth Costard trained eight 16mm cameras on the revered footballer over the complete course of a match against Coventry City. A predecessor of Douglas Gordon and Philippe’s Parreno’s acclaimed 2006 documentary Zidane: A 21st Century Portrait, Football As Never Before was made at the height of Best’s fame and tabloid notoriety. The film will be accompanied live by an improvisational score performed by 3epkano founder, Matthew Nolan, alongside David Stalling, Seán Mac Erlaine, Bryan O’Connell, and Mary Barnecutt.

Tickets for ‘Ireland and Britain, 1916-2016: A Centenary of Cinematic Conversation’ are available from www.picturehouses.com, www.barbican.org.uk/film/, and http://www.bbk.ac.uk/arts, and their respective box offices.

Tickets for the Irish Film Festival London will be available from http://www.irishfilmfestivallondon.com/.

Tickets for Football As Never Before at HOME Manchester are available from the HOME Box Office on +44 161 200 1500 and at http://homemcr.org/ This screening is supported by Goethe Institut Irland.

IFI International is supported by Culture Ireland and the Arts Council.