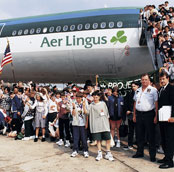 Irish documentary How to Defuse a Bomb: The Project Children Story has won the Audience Award at the 2016 IFI Documentary Festival

The Irish documentary feature How to Defuse a Bomb: The Project Children Story has won the Audience Award at the 2016 Irish Film Institute Documentary Festival, which took place over the weekend.

Directed by Des Henderson and produced by Ed Stobart, the film looks back at the work of the Project Children organisation, established in 1975 by NYPD bomb squad member Denis Mulcahy, which allowed over 20,000 children from Catholic and Protestant backgrounds to escape the Troubles and live together in the United States over the course of a summer. The children’s summer project ran for 40 years, before finishing last year. The organisation’s internship programme, established in 1995, continues to bring students to the US to live and work.

The IFI Documentary Festival ran from September 22nd to September 25th, and showcased the best in both Irish and international documentary.