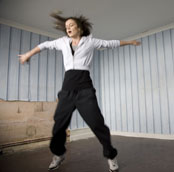 IFI to present a retrospective of the work of filmmaker Andrea Arnold, Oct 8th-16th to coincide with the release of American Honey

The Irish Film Institute will present a retrospective of the work of Oscar-winning filmmaker, Andrea Arnold from October 8th-16th to coincide with the release of her new film, American Honey, which opens on October 14th.  Each film will be accompanied by rare screenings of Arnold’s short films.