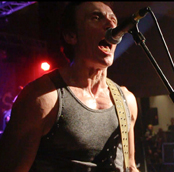 Q&A with directors Paul & Kate McCarroll following a screening of their new film Outcasts by Choice on Wednesday, Oct 5th at 6.30pm

The Irish Film Institute is delighted to welcome Irish directors Paul and Kate McCarroll to participate in a Q&A following a screening of their new documentary, Outcasts by Choice, on Wednesday, October 5th at 6.30 p.m. As part of their monthly strand focusing on Irish film and filmmakers, the IFI will present a screening of Outcasts by Choice, a new documentary by Kate and Paul McCarroll on Wednesday, Oct 5th followed by a Q&A.

The documentary begins in war-torn 1977 Belfast as three brothers and a friend form The Outcasts, a band that would lead the punk explosion while rejecting the status quo and ignoring the sectarian violence that surrounded them. In a series of frank interviews they reminisce about the early days, wonder if they can actually play their instruments this time around, are they still punks, and what is punk anyhow?

With intimate access to the band and a wealth of energetic archive, Paul and Kate McCarroll have recaptured a powerful moment in Belfast youth culture and a compelling insight into a band reclaiming that youth.

Paul and Kate McCarroll are a father-daughter team from Culdaff, Co Donegal. Their first collaboration was in 2012, with the release of The Outcasts Live in Dublin. This DVD led them directly to Outcasts by Choice, which is their first feature documentary.  It premiered at Belfast Film Festival in April, and has also screened at Galway Film Fleadh and at Rebellion Punk Festival in Blackpool.