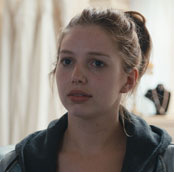 Q&A with Seána Kerslake and Darren Thornton following the opening night screening of A Date for Mad Mary on Friday, Sept 2nd

The IFI to welcome Darren Thornton and Seána Kerslake to the opening night screening of the winner of Best Irish Feature at Galway Film Fleadh, A Date for Mad Mary on Friday, September 2nd at 6.30 p.m. The Irish Film Institute will welcome director Darren Thornton and actress Seána Kerslake to the partake in a Q&A hosted by arts-writer and presenter Eithne Shortall following the opening night screening of their new film, A Date for Mad Mary on Friday, September 2nd at 6.30 p.m.

Upon release following a six month prison sentence, Mary returns home to Drogheda, eager to reunite with best friend Charlene (Charleigh Bailey), for whom she is about to act as maid of honour. Annoyed by Charlene’s assumption that she won’t have a date for the wedding, Mary joins a dating agency, embarking on a series of disastrous encounters before events take an unexpected turn.

Darren Thornton made his television debut directing the IFTA award-winning series Love is the Drug in 2004. His first short film Frankie won the Prix UIP award at the Berlin film festival in 2008 and the European Academy Award for best short film in the same year. His second short film Two Hearts also won the Prix UIP award in 2011 and was nominated for a European Academy Award in 2012. A Date for Mad Mary is his debut feature film.