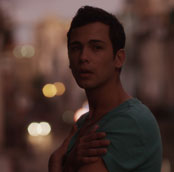 Paddy Breathnach and Mark O’Halloran to partake in a Q&A following the opening night screening of Viva on Friday, August 19th.

The IFI to welcome Paddy Breathnach and Mark O’Halloran to the opening night screening of Viva on Friday, August 19th. The Irish Film Institute will welcome director Paddy Breathnach and writer Mark O’Halloran to the partake in a Q&A following the opening night screening of their new film, Viva on Friday, August 19th at 6.30 p.m.

Viva presents an intoxicating glimpse into the vibrant and sensual world of the Cuban drag scene. Jesus, an impoverished, sensitive young make-up assistant escapes the grim reality of everyday life through his backstage work in a drag club. When his dream of performing finally comes true, a stranger emerges from the crowd and punches him in the face. The stranger is his father, Angel, a boxer, absent for many years and now in need of a place to live.

Paddy Breathnach started his directing career making natural history documentaries. His first feature, Ailsa, won the award for Best First/ Second Film at the San Sebastian Film Festival where his second feature I Went Down also won the New Directors prize in 1997. Breathnach then went on to direct Blow Dry in 2001 and Man About Dog in 2003, the latter went on to become one of the most successful independently produced Irish films.

Mark O’Halloran is a writer/actor from Co. Clare. He has appeared in numerous films, most notably as one of the eponymous heroes in Adam & Paul for which he also wrote the screenplay and the lead role of MP in History’s Future. He also appears in The Guard, Calvary and in Viva, for which he also wrote the screenplay. Mark‘s other writing credits include the multi award winning film Garage and the television series Prosperity.