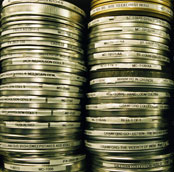 The IFI is spearheading a landmark campaign to identify the nation’s moving image heritage through the first ever register of film and video collections in the state. A call-out has been issued inviting individuals and organisations across the country to register details of their moving image collections by August 5th, as part of an initiative to create a detailed picture of the country’s rich film and video heritage. The resulting information about the quantity, condition and content of those collections will be used to inform a national strategy for preservation and access. Unlike most European countries Ireland has no national preservation policy for its moving image heritage and this is an important opportunity for Ireland to identify the steps necessary to safeguard this vital part of its culture in line with EU recommendations. The survey can be completed online at www.ifi.ie/moving-image-register

Kasandra O’Connell, Head of the IFI Irish Film Archive, said: “Film heritage is a vitally important part of our cultural identity: as the most democratic art form of our age it reaches across all ages, abilities and social groups. It is a multi-faceted medium; an historical record, aesthetic work, a means of entertainment and of cultural expression. Despite our recent successes in Hollywood and the reputation that Irish film enjoys globally, there is no national policy specifically safeguarding our film heritage collections. This leaves Ireland far behind EU requirements for member states in this area and puts our collections at risk, as they face real and immediate threats from technical obsolescence and physical degradation. This comprehensive survey of collections within Ireland is the vital first step in creating a central policy, and strategic framework for protecting and sharing this irreplaceable and invaluable cultural heritage on behalf of current and future citizens of Ireland.”

The IFI is working with Moving Media, a specialist in audio-visual archiving, to conduct the survey on behalf of the Irish Film Heritage Advisory Group, a group of stakeholders and experts within the Irish cultural sector tasked with furthering the EU Recommendation on “Film heritage and the competitiveness of related industrial industries”. This EU Recommendation was published in 2005 with the aim of highlighting the fundamental importance of film heritage within European society and encouraging Member States to proactively preserve and disseminate their national film collections. The advisory group is chaired by Kasandra O’Connell (Head of the IFI Irish Film Archive) and comprises representatives of the Department of Arts, Heritage and the Gaeltacht; the Heritage Council, the National Library, Bord Scannán na hÉireann/the Irish Film Board; the Arts Council; the Broadcasting Authority of Ireland; and the Digital Repository of Ireland.