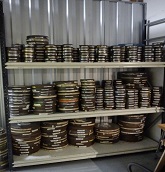 At this year’s Open Day, you’ll have a unique opportunity to go behind the scenes and hear all about the progress that’s been made on the Irish Film Archive’s latest project.

The team in the Irish Film Archive have spent 9 months opening boxes of cans, unspooling thousands of rolls of film and uncovering long-forgotten gems from our television history. Thanks to funding from the BAI Archiving Scheme, we’ve taken the first steps to preserving an enormous collection of classic Irish television ads, dating from the early 1960s right through to the 1980s. Initially acquired in the 1990s, the collection contains material from eight Dublin-based advertising agencies and includes ads from the likes of Calor Kosangas, Aer Lingus, Bolands, Joe Walsh Tours, Guinness, Cadbury’s and many more. Still from an for Calor Kosangas’ Super Ser

Throughout the IFI Open Day, members of the team will be on hand in the Tiernan MacBride Library to provide more information on the work that has taken place so far.

Come along to hear more about

And you might even get the chance to see a classic ad or two! The Dubliners appear in an ad for Bass Ale

Staff from the Irish Film Archive will be presenting on this project at the IFI Open Day at 2pm and 4pm. Max 20 per talk. Tickets will be distributed on a first-come-first-served basis from the Open Day ticket desks in the IFI Foyer and the talks will take place in the Tiernan MacBride Library in the IFI Irish Film Archive.