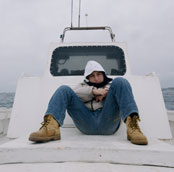 IFI to host a panel discussion on the refugee crisis as part of the Migration Learning Lab Conference, after a screening of Fire at Sea on June 14th.

The Irish Film Institute to host a panel discussion following a screening of the new award-winning documentary from Gianfranco Rosi, Fire at Sea, on Tuesday, June 14th as part of the Migration Learning Lab conference. The IFI will host a panel discussion hosted by publisher and broadcaster, Norah Casey, with guests including journalists Razan Ibraheem and Ismail Einashe, and Calais activist, Karen Moynihan, following a screening of Gianfranco Rosi’s award-winning documentary, Fire at Sea, which explores the ongoing refugee crisis. This special screening and discussion will take place on Tuesday, June 14th at 6pm, and is the opening event for a Migration Lab conference on June 15th in the Octagonal Exhibition Space, South William Street, Dublin 2.

Fire at Sea is Gianfranco Rosi’s (Sacro Gra) portrait of the island of Lampedusa, located half way between Libya and Sicily, and a flashpoint in the immigration crisis as African migrants are drawn to the tiny island during their hazardous journeys to mainland Europe. The film takes an oblique approach to its subject, choosing to focus on the everyday lives of the islanders, especially 12-year-old Samuele, juxtaposing impressionistic observations of their lives with frequently harrowing scenes of coastguard search-and-rescue missions as grievously over-burdened migrant boats are apprehended. Employing a detached viewpoint, Rosi skillfully avoids didacticism, creating a portrait of a traditional community unwittingly tainted by the geopolitical realities of conflict and war. Fire at Sea  won the Golden Bear at the 2016 Berlin Film Festival and marks a new wave in documentary filmmaking that directly engages with the refugee crisis and its victims, many of whom have perished in the Mediterranean sea.

Migration Lab is a ‘call to action’ for artists and civil society. It aims to explore the current humanitarian, forced migration crisis from a cross-sectoral and partnership perspective. Migration Lab Partners include: Counterpoints Arts, Fire Station Artists’ Studios, Immigrant Council of Ireland and the Irish Film Institute.  It is supported by the Community Foundation of Ireland, British Council & Creative Europe Desk Ireland – Culture Office, Arts Council of Ireland.

Broadcaster and publishing entrepreneur Norah Casey is Chairwoman of Harmonia, Ireland’s largest magazine publisher. She was formerly a Dragon in the popular television series Dragons’ Den and is a well-known radio and television personality. Her book Spark! was published by Penguin in 2015 and her TedX talk The Cure for Grief has been watched by thousands. Norah has been Ireland’s Publisher of the Year no fewer than four times. She has served on numerous boards and is currently a member of the Press Council of Ireland, the London-based Women’s Irish Network and The International Women’s Forum.

Razan Ibraheem is a Syrian-born journalist and works for leading social media news agency, Storyful. She is a regular contributor on the subject of Middle East politics to various newspaper articles and current events programmes on Irish radio and TV.

Ismail Einashe is a freelance journalist and researcher based in London. He is an associate editor at Warscapes magazine and a contributor to Prospect magazine and African Arguments, and is an associate research fellow at the University of Oslo where he works on comparative migration (currently researching a book about African migrants in Europe).

Karen Moynihan is currently a long-term volunteer for The Refugee Youth Service in the unofficial refugee camp in Calais working as the Child Protection Officer. She has over ten year’s experience in youth and community development in Ireland as well as overseas with a specific focus on youth development. Some of the services she has previously worked and volunteered for are the Ombudsman for Children’s Office, the Finglas Youth Resource Center and Development Education Network-Liberia. She is a life-long activist and advocate for human rights and social justice, her most recent experience is in development education and children’s rights. In May 2016 she was invited to speak in the Irish government buildings on Ireland’s lack of response to the refugee crisis and to highlight the immediate need for the safe passage of unaccompanied minors to Ireland.

Tickets for the film and discussion on June 14th are available to buy now at www.ifi.ie or by calling the IFI Box Office on 01 679 3477. Fire at Sea opens at the IFI on June 10th.