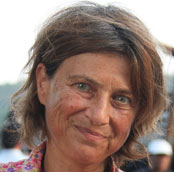 IFI to present a retrospective of the work of the late Chantal Akerman on July 9th & 10th, following the release of her final film No Home Movie on July 1st. The Irish Film Institute will present a focus on the late Chantal Akerman with screenings of News from Home on July 9th and Jeanne Dielman, 23 Quai Du Commerce, 1080 Bruxelles on July 10th following the release of her final film, No Home Movie which opens at the IFI on July 1st.

Chantal Akerman made more than 40 celebrated film works and latterly a number of gallery installation works. Revered by theorists and filmmakers alike, she produced a body of work that is at once accessible and deeply compassionate, while at the same time rigorous and always brilliantly thought through. Her subjects were the embodiment of displacement and diaspora; of migration and expulsion; of rootlessness and the comfort and imprisonment; of habit and of being too closely clung to identity. Her death last year, a year after that of her own mother, resulted in a world-wide outpouring of sorrow and respect.

Hailed as a revelatory masterpiece after its premiere at Cannes in 1975, Jeanne Dielman, 23 Quai Du Commerce, 1080 Bruxelles is a rigorous, unflinching portrayal of a Belgian widow and mother to a worrisome, bookish teenage son.  Using extended static shots to chronicle three days of Jeanne’s regimented existence as she cooks, cleans, shops, and has sex for money. Made by an almost all-female crew, including distinguished cinematographer Babette Mangolte, and featuring an astonishing performance from Delphine Seyrig, Akerman later called it “a love film for my mother”, saying, “it gives recognition to that kind of woman”.

In 1971, Akerman left Brussels for New York where she drifted about and took on a slew of low-paid jobs for about a year. In 1977, after the critical success of Jeanne Dielman, Akerman returned to New York to make News from Home, an essayistic visual record of a dispassionate city at a pivotal time set against impassive readings by Akerman of intimate, often uneasy letters to her from her mother while she lived in New York.

The final film Chantal Akerman made before her death last year, No Home Movie is as radical and moving as the seminal Belgian director’s very best work and as characteristically defiant as its powerful title suggests. Scrutinising the filmmaker’s relationship with her ailing mother Natalia, a Polish Jew and Auschwitz survivor whose experiences have had a major influence on Akerman’s life and art. Desperate to glean details of a life before it’s too late, Akerman quizzes her mother about her traumatic past but as she does the intense kinship and affection between them gets in the way, shedding light on a deeply prized bond that is slowly and tragically being undone.

Tickets for these screenings are available now, tickets from the IFI Box Office on 01 679 3477 or online at www.ifi.ie.

For images and further details please Michelle McDonagh at the IFI Press Office  on 01 679 5744  or email mmcdonagh@irishfilm.ie