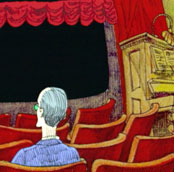 The Irish Film Institute to celebrate all things Joycean in June with screenings of Shem the Penman and Medicated Milk followed by Q&As with the directors on Bloomsday, Thursday June 16th, and with free lunchtime screenings from the IFI Irish Film Archive throughout the month of June, including a special introduction from a Joycean scholar on June 25th.

The IFI is to celebrate Bloomsday, Thursday, June 16th, the day depicted in James Joyce’s novel Ulysses with a screening of Shem the Penman (16.30), followed by a Q&A with director Padraig Trehy and a screening of Medicated Milk (18.40) followed by a Q&A with director Áine Stapleton and collaborator José Miguel Jiménez. Throughout the month of June, there will also be free screenings of Joycean films from the IFI Irish Film Archive with an introduction by Dr Sam Slote, Joycean Scholar and Associate Professor of English in Trinity College, Dublin to the Archive at Lunchtime Double Bill on Saturday, June 25th (13.00).

Shem the Penman Sings Again is a new exploration of the actual and much-fabled friendship between Joyce and Irish tenor, John McCormack. McCormack inspires the character of Shaun the Post in Joyce’s famously ‘unreadable’ final novel Finnegans Wake, in which Joyce portrayed himself as Shaun’s lowly twin brother, Shem. Following the screening at 16.30 director Padraig Trehy will participate in a post-screening Q&A.

Medicated Milk, directed by Áine Stapleton and in collaboration with José Miguel Jiménez, is a portrait of James Joyce’s daughter, Lucia Joyce. Lucia was a talented dancer, writer and musician who spent her life under the control of her father, her family and multiple doctors. Her time in Ireland during the 1930s – particularly in Bray, Co. Wicklow – was one of her few moments of freedom. The film deftly interweaves Lucia’s story with the filmmaker’s own to explore accounts of loss and trauma spanning over 100 years. Following the screening at 18.40, Áine Stapleton and José Miguel Jiménez will participate in a Q&A.

This month’s free lunchtime screenings from the IFI Irish Film Archive have a dual focus on Joyce and Shakespeare. The programme, Shakespeare and Company, is in keeping with the Bloomsday celebrations with screenings of Amharc Éireann, a look at the opening of the Joyce Tower in Sandycove with Sylvia Beach of Shakespeare and Company, publisher of Ulysses; Ulys, Tim Booth’s animated potted Ulysses; Eamon Morrissey’s Joycemen and Faithful Departed, Kieran Hickey’s portrait of Dublin on June 16th 1904. On Saturday June 25th at 13.00, Dr. Sam Slote, Joycean Scholar and Associate Professor of English in Trinity College, Dublin, will explore Joyce’s relationship with the work of William Shakespeare in an introduction to the Archive at Lunchtime Double Bill.

Director Pádraig Trehy lectures in film at CIT Crawford College of Art & Design, in Cork. He has been making shorts and documentaries for the past 15 years, many of them centering on the creative process, such as his acclaimed film about the Sultans of Ping, Trying to Sell Your Soul, When the Devil Won’t Listen (2003). His most recent documentary is Seamus Murphy: A Quiet Revolution (CCTV/BAI, 2014) which chronicles the life and work of the renowned Cork sculptor.

Director Áine Stapleton works in dance, film and music. She has a 1st Class Honours Degree in Dance Studies from the University of Surrey, London. She is co-director of Fitzgerald & Stapleton Dance Theatre with dance artist Emma Fitzgerald. Áine is also a member of the band Everything Shook who were listed in The Irish Times Best Irish Acts 2014. She is currently creating a multimedia production Fist Pump in collaboration with new Irish performance company RAK, which will premiere in late 2016.

José Miguel Jiménez studied theatre in Universidad de Chile for four years, after which he became founding member of two theatre companies currently active in Santiago. In 2004, he moved to Ireland and completed a Bachelors in Acting Studies from Trinity College. He formed The Company theatre company in Ireland. In 2009 his debut Who is Fergus Kilpatrick? won the Spirit of the Fringe award. His second show with The Company entitled As You Are Now, So Once Were We, based on James Joyce’s Ulysses, received the Best Production award as part of Absolut Fringe Festival 2010. Jose Miguel is part of Project Catalyst, an initiative of the Project Arts Centre.

Dr. Sam Slote is an Associate Professor and Director of Research at Trinity College, Dublin. He is a published Joycean scholar who has co-edited five volumes on Joyce: Probes: Genetic Studies in Joyce (1995); Genitricksling Joyce (1999); How Joyce Wrote Finnegans Wake (2007); Renascent Joyce (2013); and Derrida and Joyce: On Totality and Equivocation (2013). Since 1999 he has been one of five contributing editors for the ongoing ‘Finnegans Wake’ Notebooks at Buffalo series.