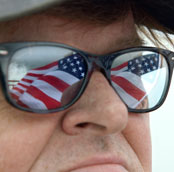 Filmmaker Michael Moore to attend a special IFTA exclusive Q&A and screening of his highly anticipated new documentary, Where to Invade Next on Monday, June 13th at the IFI. Oscar-award-winning director Michael Moore will attend the special Irish Film & Television Academy (IFTA) exclusive Discussion live in Dublin, following the IFTA screening of his new feature documentary, Where to Invade Next, on Monday, June 13th at the IFI. The screening will start at 7pm.

Michael Moore was born in Flint, Michigan. He became an Eagle Scout, attended the seminary for the Catholic priesthood, and at age 18 became the youngest elected official in the country. At 22, he founded The Flint Voice, a nationally recognised alternative newspaper. In 1989, Moore made his first film, the box office record breaking Roger & Me, which gave birth to the modern-day documentary movement. Moore went on to break the documentary box office record two more times with his 2002 Academy Award®-winning film Bowling for Columbine and the Palme d’Or-winning Fahrenheit 9/11. Other notable films include the Oscar-nominated Sicko and Capitalism: A Love Story. Moore won the Emmy Award for his series TV Nation and is one of America’s top-selling nonfiction authors, with such books as Stupid White Men and Dude, Where’s My Country?. Moore lives in Traverse City, Michigan, where he founded the Traverse City Film Festival and two art house movie palaces, the State Theatre and the Bijou by the Bay.

In his wryly titled new film, Where to Invade Next, his first since 2009’s Capitalism: A Love Story, Michael Moore is in unusually mellow form, though as impassioned as ever, as he travels around Europe cherry-picking those social innovations which he feels could be laid claim to for the betterment of American society. From the Finnish education systems to Norwegian prisons, French school dinners to the treatment received by those bankers responsible for Iceland’s financial crisis, it takes something of a romantic perspective, with an unashamed focus on the positive elements of the countries visited – in his own words, he is “picking flowers, not weeds.”

Where to Invade Next opens exclusively at the IFI on Friday, June 10th.  Tickets for all screenings are available now from the IFI Box Office on 01 679 3477 or online here.  Tickets for the special IFTA Academy Screening + Discussion on June 13th are €15 (no concessions, free list suspended for this event).  Please note that the Friday night screening (June 10th) will be followed by a separate satellite link-up Q&A with the director.

For more information about the IFTA event and the Academy, please visit www.ifta.ie