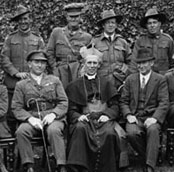 The National Film and Sound Archive of Australia (NFSA) will present the IFI Irish Film Archive with a copy of the rare 1920 film Ireland Will Be Free, a documentary about the controversial St Patrick’s Day celebrations in Melbourne, commissioned by Irish-born Archbishop Daniel Mannix. The handover ceremony will take place on 29th June at the Irish Film Institute in Temple Bar.

NFSA CEO Michael Loebenstein said: ‘Ireland Will Be Free is an important documentary which depicts the Australian-Irish relations of the time and in particular Archbishop Mannix’s support for Irish self-determination. This copy is a gift from Australia to mark the Easter Rising centenary, celebrate the 70th anniversary of diplomatic relations between Ireland and Australia, and support the ties between our countries and cultural organisations.’

The Head of the IFI Irish Film Archive, Kasandra O’Connell noted ‘This historic film reminds us of how inextricably linked the histories of Ireland and Australia are, as the Irish population of Melbourne is captured celebrating Ireland’s journey towards independence during the St Patrick’s Day celebrations of 1920. This film is particularly significant in this year of commemoration and we are grateful to our colleagues in Australia’s National Film and Sound Archive for the opportunity to add it to the collection of the IFI Irish Film Archive and share it with Irish audiences.’

Ireland Will Be Free was produced by the Melbourne Catholic Archdiocese, which donated the fragile original components to the NFSA in the 1990s. This year the NFSA digitally restored the film, which premiered in Canberra in March. The restoration of Ireland Will Be Free was partially supported by the Irish Government’s Centenary of 1916 culture fund, and facilitated by the Irish Ambassador to Australia, Mr Noel White.

An important sequence of the film – which was excised upon its initial release and is now reinstated – celebrates the Martyrs of Easter Week 1916. This material will be presented as part of IFI’s 1916 Newsreel Cine-concert – a programme that includes film from Ireland, UK, US, Germany and now, Australia –at the  Dunamaise Arts Centre, Portlaoise on 24th August, and through the IFI International programme  at the Barbican Centre, London, in November.

The film is remarkable as it captures the mood and the politics of the day: sectarianism, the aftermath of the conscription debates of the First World War, and the lasting legacy of the Anzacs.

Archbishop Mannix and his associate, the colourful entrepreneur John Wren, combined their pro-Irish messages of support with a more general humanist appeal to ‘fight for freedom of the peoples’. For this purpose they invited 14 VC winners to lead the March. The event was highly controversial, and the film was toured weeks after the event, through regional Victoria and New South Wales.

The handover ceremony will take place on 29 June, at the Irish Film Institute in Temple Bar.