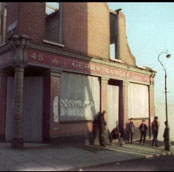 IFI presents a programme of events with Capstones Shift in June, exploring the impact of conflict on the built environment

The Irish Film Institute presents two film events in June as part of Capstones Shift, a city-wide programme exploring the architectural legacies of the Easter Rising and revolutionary period in Ireland. The IFI will present a special screening of Roberto Rossellini’s Germany Year Zero (1948) on June 1st and will host two walking tours complemented by film and architectural analysis, on June 18th, as part of Capstones Shift, a multi-disciplinary, city-wide programme exploring the architectural legacies left by the early 20th-century Irish revolutionary period.

On June 1st (19.00), the IFI presents Roberto Rossellini’s Germany Year Zero (1948), exploring the destruction of Berlin after World War II, and introduced by Professor Kathleen James-Chakraborty, UCD School of Art History and Cultural Policy. Following Rome, Open City (1945) and Paisan (1946), director Rossellini turned to the ruined city of Berlin to complete his trilogy of films in this devastating portrait of an obliterated post-war Europe, and one of the most affecting films about childhood in the history of cinema.

On June 18th at 11.00 and 14.30, in collaboration with the Irish Architecture Foundation, the IFI presents Dublin Plays Itself – two walking tours complemented by film and architectural analysis, exploring the impact of the 1916 Rising on the fabric of Dublin and the post-conflict recovery and evolution of the city in the 100 years since. The walking tours will be conducted by Dr. Ellen Rowley, Irish Research Council EPS Fellow, DCC Heritage + UCD Architecture; Merlo Kelly, Architect and Architectural Historian; and IFI Head of Irish Programming Sunniva O’Flynn. Both walks begin in the IFI, touching down in the IAF’s riverside premises on Bachelor’s Walk and in the Hugh Lane Gallery, Parnell Square for screenings of illustrative material from the IFI Irish Film Archive. Points of architectural interest along the route will be described by architectural historians Dr. Ellen Rowley (morning walk) and Merlo Kelly (afternoon walk). The tour will be open to up to 30 participants in each group.

Capstones Shift is a programme of lectures, exhibitions, conferences, film screenings and publications exploring the architectural legacies left by the early 20th-century Irish revolutionary period, from the loss of buildings destroyed to the debates about how to repair the city fabric and on to the rebuilding itself. It is presented by Dublin City Council and University College Dublin Decade of Centenaries with the support of The Department of Arts, Heritage and the Gaeltacht and in association with Architecture Ireland, Ireland 2016, The Irish Architectural Archive, The Irish Architecture Foundation, the Irish Film Institute, The National Inventory of Architectural Heritage, The National Library of Ireland and The Royal Institute of the Architects of Ireland.

FROM THE VAULTS: DUBLIN PLAYS ITSELF