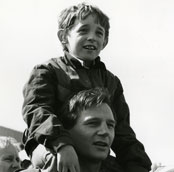 Hugh O’Conor to attend the IFI for a screening of his debut film Lamb, followed by a Q&A, on Tuesday, May 31st.

Actor Hugh O’Conor to take part in a Q&A following a screening of his debut film Lamb, on Tuesday, May 31st at 6.30 p.m. The Irish Film Institute are delighted to welcome actor Hugh O’Conor to partake in a Q&A hosted by the IFI’s Head of Irish Film Programming, Sunniva O’Flynn, following a screening of his debut feature film Lamb (1985) on Tuesday,  May 31st at 6.30 p.m.

Lamb focuses on the relationship between an idealistic young Brother, Michael Lamb (Liam Neeson), a teacher in a west of Ireland reformatory and ten-year-old Owen Kane (Hugh O’Conor), the school’s most unruly pupil. Dumped into the institution by his abusive mother, Owen is troubled and troublesome – he smokes cigarettes, curses, wets his bed, picks fights with the other boys and has epileptic seizures. Deeply ill-at-ease with the brutal regime under which the young inmates live Brother Lamb cashes in an inheritance from his recently deceased father, and flees with Owen to England.

Hugh O’Conor was an unknown child actor when he co-starred with Liam Neeson in the film. His next role was in Jim Sheridan’s Oscar-nominated My Left Foot in 1989. He later studied drama at Trinity College, Dublin, and film at New York University. More recently O’Conor starred in John Butler’s The Stag (2013) and is currently working on Brendan Muldowney’s Pilgrimage and Haifa Al Mansour’s A Storm in the Stars, both out later this year. When not taking roles in series such as Lewis, Ripper Street or Moone Boy, O’Conor works as a photographer, with work currently exhibiting at the Royal Hibernian Academy, Dublin.