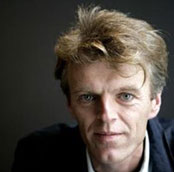 Director Grant Gee to take part in a Q&A following a screening of his new film Innocence of Memories at the IFI, Sunday May 29th at 4.30 p.m. The Irish Film Institute, in association with the International Literature Festival Dublin, is delighted to welcome director Grant Gee to the IFI to discuss his latest film, Innocence of Memories on Sunday May 29th at 4.30 p.m.

Director Grant Gee presents a reflection on Orhan Pamuk,  the Turkish Nobel Prize-winning author of My Name is Red, his Museum of Innocence and the novel of forbidden love that inspired it. In the 1990s Pamuk bought a rundown building in Beyoğlu, an unfashionable suburb of Istanbul. Over the next two decades he slowly turned it into a museum: a monument to the obsessive personality of Kemal, the fictional protagonist of his 2008 bestseller The Museum of Innocence, who hoards every object relating to his secret affair with Füsun.

Grant Gee has worked with some of the biggest musical acts of the past 30 years, including Coldplay, Nick Cave, Scott Walker and perhaps most notably with Radiohead on his film Meeting People is Easy, and his award-winning documentary feature Joy Division charting the legendary rise and fall of the band. His other works include his thought-provoking film Patience (After Sebald), based on W.G. Sebald’s notorious work The Rings of Saturn, and his ongoing collaborations with Katie Mitchell on The Yellow Wallpaper, Die Ginge des Saturn, and Night Train, her ‘live cinema’ projects blending a live theatrical experience with a cinematic presentation.

Innocence of Memories premiered at the Venice Film Festival 2015 and employs Grant’s trademark multi-layered narrative style to tell the story of Istanbul, the Museum of Innocence, and Orhan Pamuk himself.

Further details of the International Literature Festival Dublin are available at www.ilfdublin.com