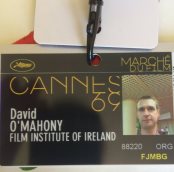 Notes on the Cannes Film Festival 2016 from the IFI’s Head of Cinema Programming David O’Mahony.

Some thoughts on my first Cannes Film Festival. If you are looking for glamorous tales of yacht parties and so forth, I’m sorry to have to disappoint at the outset.

The increasing primacy of the Cannes film Festival cannot be overstated; it is the starting point in the art-house release calendar, and has arguably stolen the thunder from Venice and Berlin. Directors, and perhaps more importantly distributors and sales agents crave a Cannes berth with the prestige it bestows. Recent years have witnessed a discernable migration of juicier titles away from Potsdamer Plaz and the Lido towards the Croisette. So while it’s great to be able to consume the next year’s key titles in one glutinous fortnight the downside is the inevitable overcrowding of both films and bodies trying to see them. The festival really is an essay in supply and demand – yes the rumours of cattle-mart queues and very early mornings are all true and I won’t belabour them again suffice to say that the situation often requires judicious employment of the ‘Cannes elbow’ in order to gain access. And the less said the better about the fact that you are forced to wear your debs outfit whilst queuing for the evening shows.

Beyond the main competition of 21 titles, Cannes offers a number of competitive parallel strands, each with their own particular flavour, with most titles having numerous screenings over the course of the festival. Un Certain Regard, often where edgier fare resides; the independent sidebar Quinzaine des Realisateurs (The Director’s Fortnight); La Semaine de la Critique (Critics Week) which aims to uncover first and second features from emerging talents. It takes some degree of pre-planning to devise an achievable schedule of screenings (some of which is decided by whether or not tickets are secured to the red-carpet evening shows, which are released the day prior. It should also be mentioned that the Cannes ticket robots penalise you if you fail to use an allocated ticket, reducing the number they dole out for subsequent gala shows), and I found it helpful to consider the various IFI programmes – Documentary Film Festival; Horrorthon; Family Festival; French Film Festival – when making decisions as to what to prioritise. For example, with Doc Fest approaching in September, I made sure to catch Hissein Habre: A Chadian Tragedy from acclaimed director Mahamet-Saleh Haroun (A Screaming Man), and Jim Jarmusch’s Gimme Danger, a thrilling celebration of Iggy Pop and The Stooges, Jarmusch’s second film at the festival, his droll, poetic Patterson occupying a deserved main competition slot.

One of the most buzzed about films in the main competition was German entry Toni Erdmann from director Maren Ade which set a record high score on Screen International’s review aggregator following its press screening. It subsequently became my white whale (an apt description given its lengthy running time) as I tried and failed on numerous occasions to track it down, its ‘hot ticket’ status attracting legions who might otherwise not have sought out a three hour German comedy. It was the priority badge holders, buyers usually, who scuttled my attempts, blithely brushing past me as I stood in line for upwards of ninety minutes at a time. Persistence paid dividends and I’m pleased to confirm those rave reviews; a tender story of a father’s unconventional efforts to reconnect with his estranged daughter, the film features moments of surprisingly uproarious comedy (rarely has the adage ‘it will have you roaring with laughter’ been so applicable; the audience I saw it with looked to be in need of medical attention such were the whoops and guffaws throughout). Needless to say I’ll be chasing it for the IFI.

If a common theme emerged it was the duration of many titles, a trait that can send a chill down the programmer’s spine. For example – Sieranevada: 174 minutes; The Handmaiden: 145; American Honey: 162; The Wailing: 156; Aquarius: 140. In this context the 80 minutes running time of Studio Ghibli’s The Red Turtle came as a blessed relief. This utterly delightful, near silent animated tale of an island castaway gives the lie to the great studio’s cessation of activities.

As for films that didn’t quite hit the mark, I was on the fence about Xavier Dolan’s it’s Only the End of The World; I found its shrill tone and relentless familial bickering made for a rather suffocating experience. Think of a hyper stylised August, Osage County, with extra sibling squabbling. However, given that I had attended four screenings back-to-back beforehand there’s every chance that, when viewed again in isolation in a less intense environment, I’ll savour the film’s heightened theatricality as I have done with all of the prodigiously talented Dolan’s previous films. Context really is key.

A final note on the truly extraordinary apartment the IFI use each year – if Liberace didn’t once live there, he was at the very least consulted for decorating tips.