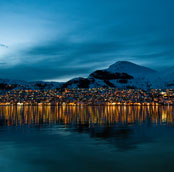 Director Risteard O Domhnaill will attend the opening night screening of his latest film Atlantic, showing exclusively at the Irish Film Institute, and will be joined by Arranmore and Rossaveal fishermen for a Q&A following the screening on Friday, April 29th at 8.30pm.

The second feature documentary from acclaimed director Risteard O Domhnaill (The Pipe), Atlantic follows the fortunes of three small fishing communities in Norway, Newfoundland and Arranmore as they struggle to maintain their way of life in the face of mounting economic and ecological challenges, and looks at the threat posed to the ocean’s ecosystem and fishing communities by oil exploration and overfishing. This visually stunning new work, persuasively narrated by Brendan Gleeson, brings the personal stories in the vital resource debate to the fore to explore how these communities must learn from the past in order to secure a brighter future.

Risteard Ó Domhnaill is a director and cameraman based in the West of Ireland. Risteard was a student of Irish and History at the National University of Ireland, Galway and after completing a course in camera work, he moved back to County Mayo where he spent the next four years filming the protests over the Corrib Gas pipeline. The story focused on those at the centre of the opposition against Shell, many of whom he had known since he was young. His resulting feature film, The Pipe debuted at the Toronto International Film Festival and enjoyed successful international distribution in over 20 countries. The Pipe lead Risteard to look at the politics of oil and gas prospects off the Irish coast and looking across the Atlantic to find that Ireland’s tale is not unique. What has since unfolded is an incredible story of resource mismanagement, explored by Risteard in his latest film Atlantic.

Tickets for this screening + Q&A are available now from the IFI Box Office on 01 679 3477 or online at www.ifi.ie. Atlantic opens for a run at the IFI on Friday April 29th.