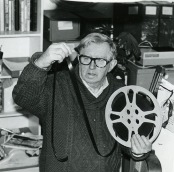 The first in a series of blog posts describing the Liam O’Leary Archive, this first blog will provide an overview of the collaborative project between the Irish Film Institute and the National Library of Ireland, who are collaborating to preserve and catalogue the archive of Liam O’Leary (1910-1992); a founding member of the Irish Film Society, actor, writer, film researcher, historian, archivist and overall film fanatic. O’Leary laid the foundation stone of the Irish Film Archive, in April 1992, where his film collection is now preserved. The Liam O’Leary Archive, which was donated to the National Library of Ireland in 1986 comprise O’Leary’s papers relating to his research into Irish film, filmmakers and cinemas, and his personal collection of correspondence and film memorabilia. Photograph of Liam O’Leary, courtesy of the Irish Film Archive

The archive also includes the fascinating archives of the Irish Film Society. Established in 1936, the Irish Film Society’s mission was to encourage Irish film production and show an alternative film selection to those shown in commercial cinema, to provide a forum for discussion of film and to organise lectures, film schools and even a junior film society. The papers provide a remarkable insight into the film and cinema culture of Ireland in the mid to late twentieth century, and significantly, the Society’s showings were exempt from official state censorship. The Liam O’Leary Archive includes documents, manuscripts, journals and newspaper clippings along with various sub-collections of other items such as photographs and film stills, posters, slides, artefacts, VHS tapes, audio reels and cassettes. The audio reels are particularly interesting as they contain interviews and discussions conducted by O’Leary with cinema workers (such as projectionists, cinema managers, ushers and musicians) and anyone who appeared in, participated in, or had knowledge of the Irish film industry at the time. Interviewees include George Morrison, Kieran Hickey and Lenny Collinge, who was a projectionist in the Volta, Ireland’s first dedicated cinema which was managed for a time by James Joyce. A small box of slides held in Liam O’Leary Archive

The variety of formats in the collection, while hugely interesting, poses preservation and access challenges.  Account must also be taken of any data protection, confidentiality and copyright issues as well as concerns around format obsolescence and lack of appropriate equipment for access. The project is due to be completed in 2017 when the collection will be made available to researchers and will provide a great link to the holdings of the IFI, particularly Liam O’Leary’s film collection held there. The archive will prove an invaluable resource for the study of Irish film and cinema, culture and identity in the 20th Century. Plaque outside the Irish Film Archive

Over the coming months this blog will highlight some interesting aspects of the collection and provide an update on the progress of the project.