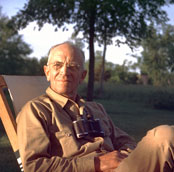 The IFI presents a screening of Green Fire, a documentary on the work of iconic American environmental pioneer Aldo Leopold, followed by a panel discussion focusing on his key ideas within an Irish context, on April 26th at 6.30pm. The Irish Film Institute presents a screening of the documentary and welcomes The Irish Times’ environmental writer Paddy Woodworth, along with Lórcan O’Toole (Project Manager of conservation charity, The Golden Eagle Trust), Michael Davoren (Chairman of the Burren Irish Farmers Association), independent filmmaker Róisín  Loughrey and biology professor Tom Davis, to partake in a panel discussion focusing on some of Leopold’s key ideas within an Irish context on Tuesday, April 26th at 6.30pm.

Green Fire explores the life and legacy of famed conservationist Aldo Leopold and the many ways his land ethic philosophy lives on today. In this feature documentary, Leopold’s biographer Curt Meine guides us through the life and work of the great 20th century environmentalist, connecting some of Leopold’s ideas on what he referred to as “the land ethic” with contemporary agricultural and environmental concerns, and  illustrates Leopold’s continuing influence by exploring current projects that connect people and land at the local level.