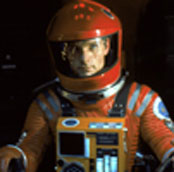 The IFI exclusively presents Stanley Kubrick’s science-fiction masterpiece 2001: A Space Odyssey on 70mm from April 8th to 14th with guest scientific expert speakers to introduce a special screening on April 10th as part of its Futures Past season.

Stanley Kubrick’s iconic masterpiece is speculative sci-fi on a truly grand scale; covering the entire history of man, the film dares to posit what might be the next evolutionary leap for our species. A monolith, unknowable and of alien origin, is present at key moments in man’s development; from the first discovery of tools to interplanetary space travel and beyond, it acts as a sentinel to our progress. With its inspired use of classical music, astonishing special effects, designed by Douglas Trumbull (Silent Running), and overwhelming sense of awe and wonder, 2001 is more aligned to philosophical enquiry than conventional cinema.

On Sunday April 10th the IFI will welcome speakers Joseph Roche (former Mars One Candidate/Professor of Education, TCD) and Peter Gallagher (Professor of Astrophysics, TCD) to discuss the themes of space flight, living ‘off-earth’ and wormholes as part of FUTURES PAST, a season of classic science-fiction films paired with scientific experts, who will speak about how cinema of the past has imagined our future in partnership with Science Gallery at Trinity College Dublin, and running from April 6th to 27th.

As part of IFI Explorers, a special edition of this film will take place on April 13th where 15-18 year olds can pay just €3 a ticket to see this 70mm masterpiece.