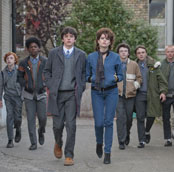 Director John Carney to take part in a Q&A along with lead cast members following the opening night screening of his highly anticipated new film Sing Street on March 18th at 8pm. Director John Carney and lead actors Ferdia Walsh-Peelo and Mark McKenna will attend the IFI for a Q&A following the opening night screening of their new film Sing Street on Friday March 18th. The screening will start at 8pm.

With money tight in a boozy, middle-class 1980s Dublin household, youngest son Conor (Ferdia Walsh-Peelo) is forced to transfer from his private school to the Brothers in Synge Street where posh new boys are easy prey for the school bullies. Working on relationship advice and musical cues from his much-admired, louche, older brother (Jack Reynor), he forms a band to attract a sophisticated older woman (Lucy Boynton) who he persuades to appear in a series of music videos.

Presenting a pitch-perfect reconstruction of Dublin teen life in the 1980s, director John Carney (Once) has scored another triumph with this hilarious, warm-hearted musical tale.

Carney’s most recent feature film credits as writer/director include Begin Again, starring Mark Ruffalo and Keira Knightley; Once featuring the music of Glen Hansard; On the Edge starring Cillian Murphy and Stephen Rea; and November Afternoon. His previous television credits include Bachelor’s Walk Christmas Special and Bachelor’s Walk for RTÉ and Just in Time starring Frances Barber. John’s theatre credits include the stage show Once, adapted from the musical feature film, directed by John Tiffany.

Ferdia Walsh-Peelo (Conor) began performing on stage as a boy soprano soloist at the age of seven. In 2012 Ferdia clinched a much-coveted spot on The Late Late Toy Show singing O Holy Night and accompanying himself on piano. At the age of fourteen he walked into an open casting for John Carney’s Sing Street, his rendition of Blackbird by the Beatles put him on the shortlist for the role of Cosmo.

Mark McKenna (Eamon) Mark McKenna is an 18-year-old Dublin lad who has developed a love of music and acting from a young age. Mark is currently a member of Dublin Youth Theatre and also of Portmarnock Youth Theatre. Sing Street is his first feature film.