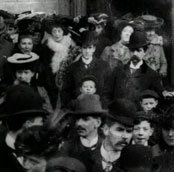 The Sound of Silents presents a colourful range of rarely-screened silent films from the IFI Irish Film Archive dating from 1897 to 1970, with accompaniment from Bottlenote Music at the Irish Film Institute on April 9th at 14.00 and 20.30. The programme is part of Dublin City Council’s Musictown 2016. The IFI have reunited with the innovative minds of Bottlenote Music to uncover the treasures of the IFI Irish Film Archive with an audiovisual treat comprising short silent films accompanied by live improvised scores from five musicians, working between the fields of Irish traditional, jazz and electronic music in two performances on Saturday, April 9th at the IFI.

Eoghan Neff (fiddle), Seán Mac Erlaine (woodwind/electronics), Shane Latimer (guitar/electronics), Jack McMahon (turntables) and Seán Carpio (percussion/guitar/voice) will breathe new life into these old films with a range of soundscapes from traditional to electronic, using woodwind, percussion, turntables, fiddle and electric guitar. A selection of factual and fictional films, many not seen before in a public arena, includes the earliest moving images of Dublin filmed by Alexander Promio for the Lumière Bros in (1897); remarkable scenes of inner-city church-goers at St Francis Xavier’s Church and the Pro-Cathedral in 1901; a sweeping panorama of College Green in 1902; wry commentary on the streets of Dublin from US comedian Will Rogers (1927); a day in life of the Masonic Girls’ School in Ballsbridge (now the Clayton, formerly Bewleys Hotel) in the late ’30s; a rural idyll filmed by amateur enthusiast Conway Maxwell in Lusk in the late ’30s; and an enigmatic drama about a boy whose life is transformed at the Holy Ghost Youth Club in Dun Laoghaire in the early ‘70s.

Sunniva O’Flynn, Head of Irish Film Programming at the IFI, said “We’re delighted to be part of Dublin City Council’s Musictown 2016 and to work again with Bottlenote whose musical responses always provide a fresh and intriguing counterpoint to the archival films. This film programme is particularly rich, tonally varied and with an energetic combination of urban and rural, drama and documentary, public and personal material. It will be a pleasure to share the Archive’s treasures with contemporary audiences.”

Bottlenote Music is an artist-led project dedicated to presenting Dublin’s leading musicians working in improvised music today. Bottlenote Music’s activities are curated by musicians Shane Latimer, Justin Carroll and Seán Mac Erlaine. Bottlenote’s concerts and recordings illustrate just how varied, exciting and all-encompassing contemporary music made in Ireland can be and The Sound of Silents is no exception, promising a rich fusion of our visual heritage and contemporary, improvised sounds.

For more information and images, please contact Michelle McDonagh at the IFI Press Office (mmcdonagh@irishfilm.ie or 01 679 5744).