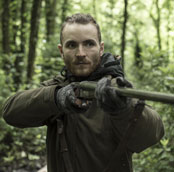 The Survivalist lead cast members  Martin McCann and Olwen Fouéré to attend a post screening Q&A at the IFI on Feb 12th at 8.30pm

Martin McCann and Olwen Fouéré will attend the IFI for a Q&A following the opening night screening of their new film The Survivalist on Friday, February 12th. The screening will start at 8.30pm.

The Survivalist is writer-director Stephen Fingleton’s first feature film. It is an impressively sustained exercise in tension building in which actors Martin McCann and Olwen Fouéré give outstanding performances. An anonymous survivor (McCann) is alone in a post-apocalyptic world until his daily routine is disrupted by a woman (Fouére) and her daughter (Mia Goth). Desperate to survive, the three form an alliance and so begins a tense, minimalist chamber piece in which shifting allegiances between the three characters raise the threat of violence.

Martin McCann is an up-and-coming actor who has worked with Steven Spielberg and Richard Attenborough and won the 2011 Irish Film and Television Award for his lead role in the feature film Swansong. Martin’s credits since then have included X + Y, ’71 from director Yann Demange, Clash of the Titans directed by Louis Leterrier (The Incredible Hulk), the extremely well-received TV mini-series The Pacific which was nominated for a Golden Globe in 2011 and the BIFA- winning Shadow Dancer, starring Clive Owen. Most recently, he starred in the short film Boogaloo and Graham, from director Michael Lennox, which won a BAFTA and was nominated for an Oscar this year. His impressive performance in Stephen Fingleton’s short film Magpie won him the lead role in The Survivalist.

Olwen Fouéré is a prolific actress, writer and theatre artist. She has starred in the BAFTA nominated Ballykissangel in 1996 and in The Other Side of Sleep which was nominated for a Golden Camera Award at the 2011 Cannes Film Festival. In 2011, she starred alongside Sean Penn in This Must Be The Place which won a Prize of the Ecumenical Jury at Cannes. Recent theatre work includes her internationally acclaimed adaptation and performance of Riverrun (from Finnegan’s Wake) for which she received numerous awards. Following on from The Survivalist, Olwen is due to appear in Traders, a dark comedy starring Killian Scott (Calvary).