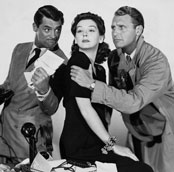 The IFI presents After the Chick Flick: Female Identities and Hollywood Film with a screening of His Girl Friday followed by a panel discussion with Professor Diane Negra and guests on March 5th

The Irish Film Institute presents After the Chick Flick: Female Identities and Hollywood Film and welcomes Diane Negra, Professor of Film Studies and Screen Culture and Head of Film Studies at UCD, along with Dr. Deborah Jermyn (Roehampton University) and Dr. Shelley Cobb (University of Southampton) to partake in a panel discussion looking at female identities and Hollywood film. The discussion will follow a screening of Howard Hawks’ 1940 screwball comedy His Girl Friday on Saturday March 5th at 12pm.

Tickets: €10 for both screening and panel discussion (tickets not sold separately) are available at www.ifi.ie There will be a short break after the screening (approx. 30 mins) before the discussion starts.

For interviews with Diane Negra and images please contact Michelle McDonagh on 01 679 5744 or email mmcdonagh@irishfilm.ie