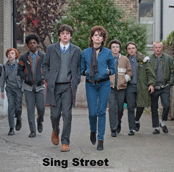 IFI, the home of film in Ireland, continues its commitment to placing Irish cinema front and centre

The Irish Film Institute, the home of film in Ireland, celebrates the recent success of Irish cinema through its continuing commitment to placing Irish cinema front and centre with a slate of new Irish features, seasons and shorts at the IFI over the coming months.

Ross Keane, Director of the IFI, said: “The recent success of Irish film on an international scale, from Golden Globes glory to the unprecedented strong Irish representation at the Academy Awards, highlights the current strength of Irish cinema. With a grand total of nine Oscar nominations, it’s a thrilling time for Irish film, and one which deserves to be richly celebrated.”

In this regard, film fans anticipating awards success at this year’s Oscars can catch Benjamin Cleary’s nominated short film, Stutterer, in which a lonely typographer with a speech impediment but an eloquent inner voice must face his greatest fear, before screenings of King Jack at the IFI, which opens on February 26th. Extra screenings of John Crowley’s Brooklyn have been added to the schedule, and Lenny Abrahamson’s Room continues its run at the IFI ahead of the Awards.

Keane continued: “Of course, this success does not happen overnight and directly points to the need for sustained investment in the arts. Irish culture is our strongest calling card internationally, and yet the support for this area has been drastically cut in recent years. For example, since 2008, the Irish Film Board’s funding has been cut from €20m to €11.2m, and €30m has been stripped from the Arts Council in that same period. If we want a vibrant arts scene, and for Irish arts to succeed – both at home and abroad – then funding levels urgently need to be restored to pre-2008 levels, or else this recent awards-season success will be very short lived and unsustainable.”

This month the IFI counts Irish productions among its new releases programme with Strangerland and The Truth Commissioner featuring, while new Irish filmmaking will be showcased in its monthly Irish Focus strand with Robert Manson’s Lost in the Living showing on February 11th, 6.30pm followed by a Q&A with the director. The first comprehensive retrospective of the work of Cathal Black continues until February 14th during which the filmmaker will visit the IFI for a discussion on his films to date with NUIG’s Tony Tracy on February 13th (2pm).

Alongside regular IFI monthly film strands highlighting Irish film from the IFI Irish Film Archive with From the Vaults and Archive at Lunchtime, Appraising the Uprising, the IFI’s 1916 Centenary programme, will feature ciné-concerts, newsreels, shorts and Irish features throughout the month of March. The IFI will also host the premiere of Splanc! on March 14th, the arts documentary scheme supported by the Arts Council, TG4 and Galway Film Centre presenting seven Irish language shorts celebrating Irish art and artists.

On April 15th, the fourth annual focus on Irish Film, IFI Spotlight, will include a series of panel discussions and events on the future of Irish film and challenges facing the industry. The programme will incorporate a review of 2015 film and TV production and will consider audience and critical response to output.

MY NAME IS EMILY – opens April

VIVA – release date to be confirmed

THE SECRET SCRIPTURE – release date to be confirmed

Tickets for Strangerland, Brooklyn, Room, Cathal Black in Focus, and King Jack (Stutterer) are available now from the IFI Box Office on 01 679 3477 or online at www.ifi.ie.

For images and further details please contact Deirdre O’Reilly at the IFI Press Office on 01 679 5744 or email doreilly@irishfilm.ie