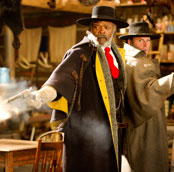 The IFI exclusively presents the much-anticipated Roadshow Release of Quentin Tarantino’s The Hateful Eight in glorious Ultra Panavision 70mm from Friday March 11th and, due to overwhelming demand, has extended its run to March 17th. The eagerly awaited Roadshow Release of Quentin Tarantino’s The Hateful Eight in Ultra Panavision 70mm comes to the IFI, the only venue in Ireland capable of showing 70mm prints, from Friday, March 11th. Due to overwhelming demand (both March 11th and 12th screenings almost immediately sold out), the IFI has now added exclusive extra screenings which will run daily for the week Friday, March 11th – Thursday, March 17th.

The Roadshow Release of Quentin Tarantino’s The Hateful Eight pays homage to and recreates the grand exhibition style popularised in the ‘50s and ‘60s that brought audiences to theatres with the promise of a special event. Presented in glorious Ultra Panavision 70mm, this is a longer version, with a musical overture to start the show, and a well-placed intermission.

The plot is a model of economy: in post-civil war Wyoming, a group of strangers, including bounty hunter John Ruth (Kurt Russell) and his quarry Daisy Domergue (Jennifer Jason Lee), are forced to take refuge from a blizzard and are soon embroiled in a tense game of treachery and deceit. The lengthy running time affords space for backstory and digressions that adds depth and shade to the ensuing drama, strengthening our impression that nothing about these characters is quite as it appears.