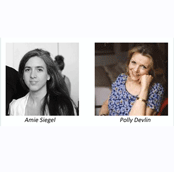 Filmmakers Amie Siegel and Polly Devlin to attend a Q&A following screenings of two specially selected films, DDR/DDR and The Daisy Chain, on February 23rd and 24th  respectively at the IFI.

The IFI, in collaboration with Temple Bar Gallery and Studios, welcomes filmmaker Amie Siegel to the IFI on Tuesday, February 23rd at 6.30pm to partake in a Q&A following a screening of her film DDR/DDR. Amie Siegel will then join filmmaker Polly Devlin for a Q&A following a screening of Devlin’s film, The Daisy Chain on Wednesday, February 24th at 6.30pm. DDR/DDR and The Daisy Chain have been selected by curator Megs Morley and artist Amie Siegel as part of her exhibition ‘Imitation of Life’ at TBG+S (Feb 19th-Apr 2nd).

DDR/DDR is one in a series of feature-length associative visual essays exploring the German Democratic Republic and the remnants of its collapse. Challenging the conventions of documentary and narrative film through a montage of staged and performed moments, archived Stasi surveillance footage and interviews with former citizens and agents, Siegel examines the relationship between the development of cinema, psychoanalysis and the Stasi’s surveillance of its citizens. The Daisy Chain is considered more of a ‘traditional’ documentary but explodes into a whirl of ethical contradictions when Daisy, Polly’s young daughter and main subject of the film, apparently withdraws her co-operation. In front of the cameras, an emotional battle for power unfolds and the documentary enters a realm where accepted notions of objective observation collapse.

Amie Siegel works variously in photography, video, film installation, performance and feature films for the cinema. Her work has been the subject of recent solo exhibitions including Amie Siegel: Provenance at The Metropolitan Museum of Art, New York and Amie Siegel. Part 2: Ricochet at Kunstmuseum Stuttgart. Her films have screened at the Cannes, Berlin, Toronto and New York Film Festivals, The Museum of Modern Art, New York and The National Gallery of Art, Washington, D.C.

Polly Devlin is an author, journalist, broadcaster, filmmaker who has had a remarkable career taking her from her rural roots in County Tyrone in Ireland to the sophisticated world of arts and letters in London, New York and Paris.  In addition to her acclaimed books, she is also the author of the Vogue Book of Fashion Photography, A Guide Book to Dublin and a book of essays, Only Sometimes Looking Sideways and a publication for the National Gallery of Ireland on their ceramic collection. In 1994 she was awarded an OBE for services to Literature.

Megs Morley is an independent curator and artist. Most recently she curated ‘A State within a State’ (the Galway Plastik Festival of artists moving image, 2015). In 2014 she was the Curator in Residence for Galway City where she developed a year-long nomadic and pedagogical institution ‘The Para Institution’.

Tickets for these screenings are available now from the IFI Box Office on 01 679 3477 or by clicking here.