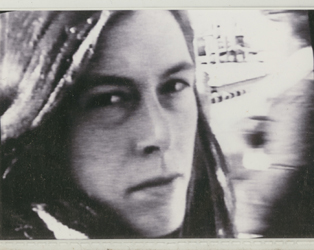 The IFI to present one of the major works of diary filmmaking, Selections from the Five Year Diary, by film artist Anne Charlotte Robertson with new artists’ moving image organisation, AEMI Projections, on January 20th. The film will be introduced by Benjamin Cook (Director of LUX). The IFI & AEMI Projections will present the work of the exceptional, if little known, film artist, Anne Charlotte Robertson on January 20th at 6.30pm in a programme curated and introduced by Benjamin Cook (Director of LUX) and in association with Harvard Film Archive. It will be the inaugural screening for AEMI  Projections (Artists’ & Experimental Moving Image), a new organisation which aims to develop audiences for artists’ moving image in Ireland through regular curated programmes of both Irish and international work, and which builds on work already carried out by other organisations, particularly The Experimental Film Club.

Begun in the early 1980s and running to over 38 hours of Super 8 film, Anne Charlotte Robertson’s Five Year Diary stands as one of the major works of diary filmmaking. The films are an intimate and exhaustively narrated chronicle of her daily life in Framingham, Massachusetts and her battles with depression, paranoia, and borderline schizophrenia. Over the course of the Diary, Robertson unflinchingly documents nervous breakdowns and hospitalisations, her obsessive crush on Doctor Who actor Tom Baker, her battles with weight, the side effects of prescription medication and the death of her three-year-old niece, Emily. Though often painfully raw and emotional, the diary is not entirely bleak, leavened with self-awareness and humour it becomes a redemptive form of self-therapy which for Robertson ultimately tells ‘the story of a mind’s survival.’

Tickets for this screening are available now from the IFI Box Office on 01 679 3477 or by clicking here.

After the screening at the IFI, a discussion will follow in Temple Bar Gallery + Studios with Benjamin Cook, addressing Anne Charlotte Robertson and her legacy, in association with LUX, IFI and TBG+S. This discussion is free to attend but places are limited so booking is advised via www.templebargallery.com

Benjamin Cook is the founder director of LUX, the UK agency for the support and promotion of artists’ working with the moving image. He has been professionally involved in independent film and visual arts sector in the UK for the past 20 years as a curator, archivist, producer, writer and lecturer. He is the co-founder of a research masters in moving image art with Central Saint Martins and the LUX Associate Artists Programme, a successful post-academic programme for artists. He is Chairman of The Elephant Trust and a Director of the Independent Cinema Office, AV Festival, Newcastle and Animate Projects.

Founded in Dublin in 2016 by Daniel Fitzpatrick and Alice Butler, AEMI  (supporting and exhibiting Artists’ and Experimental Moving Image) builds on work already carried out by other organisations, particularly The Experimental Film Club, of which both Daniel and Alice were curatorial members. A key objective of AEMI Projections is to develop audiences for artists’ moving image in Ireland through regular curated programmes of both Irish and international work with the intention of contributing to and developing critical discourse around a wide range of practices in this area.

For more information, interview requests with LUX’s Benjamin Cook and images, please contact Michelle McDonagh at the IFI on 01 679 5744.